INSIDE THE MUSICIAN. Lina Andonovska: Coping with COVID

Two months ago today, I launched an album under Irish experimental label Diatribe Record, featuring five brand new works composed for me, and performed in concert with one of my role models and mentors – the extraordinary Claire Chase. My composer collaborators for this project had uniquely crafted work that showcased my ability – from playing the flute whilst reciting James Joyce and doing flamenco footwork, to manipulating the bass flute so that the only sounds it produced were percussive key slaps and feedback, to the virtuosic moto perpetuo layer upon layer of semiquavers. This was a pipe dream fantasy in many ways, and I am still pinching myself that it actually happened (only just!). The performance itself took place a few weeks before Europe went into lockdown, changing the course of what many had planned for as well as hoped that 2020 might bring.

At the time of writing, most of us are quarantined, locked down, and forced to face the reality of not knowing when the time will come again where we play to a live audience that we can share the same space with. Now more than ever, artists are forced to become a sort of overnight entrepreneur: carve a ‘new mode’ for themselves and the way that they operate and function within society. For me, these past weeks have been a wake up call as to why I have spent the last 25 years of my life honing my skill: it is the essence to my life and I can no longer share it and communicate it with people that are breathing in the same air that I breathe, that are taking in each breath with me.

All of a sudden we have come face to face with questioning the role that creativity takes up not only in our own lives, but the lives of others.

In my own practice, ever since I graduated, I have used every skill that I have in order to turn a closed door into an opportunity. When I decided to relocate to Ireland about 4 years ago after beginning to establish myself as a leading arts practitioner not only in Australia but worldwide, I was faced with having to look outside of the square as to how I was going to integrate myself into the new musical landscape that I had just landed in. I think this is perhaps integral to surviving as a freelancer – not only do you have to be at the top of your game on the concert platform (or whatever platform you choose) but you have to know all of the steps needed to get to that point, and use every single skill in the toolbox in many different contexts. Or perhaps another way of saying this: to have many different strings to your bow – not only performer, but curator, collaborator, administrator, educator – the list goes on.

Throughout my time in Ireland, I worked part-time in arts administration where I uncovered new skills that ultimately have given me the resources and tools to be able to lead a successful self-directed creative career. I was able to refine my skills in grant writing, website maintenance, online marketing but also more importantly being able to establish quick and meaningful relationships with stakeholders who ultimately became collaborators. I think because of the fact that I was not locked down in a full-time position with one particular ensemble, this gave me the energy, motivation and momentum to invest in my own creative projects. My inherent need to create led me down the path of establishing a new creative network of collaborators, not only locally but more and more globally. One of my biggest achievements that I am most proud of, apart from just surviving and thriving (which is in itself quite the challenge) was releasing the CD of all new Irish compositions. Since my relocation, I have had over 30 new works written for me, mostly solo. I was in such a fortunate position to have a dream team of collaborators with whom I was able to sculpt the record, as well as the support of the Australia Council to produce a significant sonic offering of a particular chapter of my life.

Turning everything into an opportunity is optimistic, but I do believe that staying positive is essential to effective collaboration. When collaborating, I find that another key element to me is to be open and gracious, with the shared aim of invoking the many possibilities of what you and your creative partners can conjure up. During the last few years of my career as well as the last few weeks, maintaining a positive and fresh perspective has been essential to survival. I’ve been told many times that I am resilient. Not only in my creative practice, but also in my personal life. And I believe that at this point in time, resilience is something we need to turn to as we pave a new path for ourselves. Resilience is a quality that many of my role models and mentors possess, and it’s something that has guided my way to this point. More than ever in my life, I turn to it now.

I’ve also learned that perhaps I have been taking the opportunities to create music with people from all over the globe for granted. As a freelancer, there are times when the diary is so full that you are juggling with several double bookings as a result of always saying yes to every opportunity. Then, there are times when the diary is empty for months. Those months are tough…. The annual trip down to Centrelink to claim the Jobseeker payment when the school term has finished for the year and there were no gigs between December and February was always a very sobering experience. Now many are in that same position, but this time not knowing when the time will come again when we might be invited to share our music with the community, or earn an income from our profession.

For me, a big reason why I have dedicated my life to music is the joy that it brings to my life and the community. I have spent some time in Timor-Leste where the only language I knew was sound. In the last couple of years I have been travelling to Ecuador where I get the opportunity to collaborate with a number of inspiring musicians from around the world, and take music programmes to communities that would not otherwise experience it. Knowing that I have chapters in my life like this to look forward to keeps me getting up out of bed every day.

I look forward with so much enthusiasm, excitement and joy to the day that we can get together again to throw some shapes in the air with our sound. Until then, I am taking the time to regroup and retreat, instead of sending my energy out into the unknown. This is a time to preserve, to hibernate, to plan, to map out. And in this mode, I stay inspired by listening to the sounds and voices of my creative community from their respective lockdowns around the world.

Lina Andonovska (Freedman Fellow 2013) is a European-based Australian flute player, and an advocate for new music. Her recent solo performance at the Melbourne International Arts Festival was hailed as ‘re-defining the act of going solo’ by The Age, and her debut record has been critically acclaimed globally. She has worked with composers including Louis Andriessen, Donnacha Dennehy, Andrew Ford, Anthony Pateras, Ann Cleare and Bryce Dessner to name a few. She has appeared with ensembles Australian Chamber Orchestra, Crash Ensemble, stargaze and with flautist Claire Chase. She is currently completing the International Ensemble Modern Academy in Frankfurt am Main, and will be appearing with eighth blackbird when the restrictions lift.

The recording, A Way A Lone A Last is reviewed by Alex Raineri in Loudmouth, here:

A Way A Lone A Last 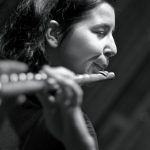 Lina Andonovska (Freedman Fellow 2013) is a European-based Australian flute player, and an advocate for new music. Her recent solo performance at the Melbourne International Arts Festival was hailed as ‘re-defining the act of going solo’ by The Age, and her debut record has been critically acclaimed globally. She has worked with composers including Louis Andriessen, Donnacha Dennehy, Andrew Ford, Anthony Pateras, Ann Cleare and Bryce Dessner to name a few. She has appeared with ensembles Australian Chamber Orchestra, Crash Ensemble, stargaze and with flautist Claire Chase. She is currently completing the International Ensemble Modern Academy in Frankfurt am Main, and will be appearing with eighth blackbird when the restrictions lift.