INSIDE THE MUSICIAN. Caerwen Martin: The World Within

As a child growing up with a disability, I spent my first 7 years doing long stays in hospital, sometimes in isolation, and was physically restricted when at home. I knew no different, so the experience was not overwhelmingly unpleasant, however, at a formative age I was wracked with months on end of profound boredom.

Boredom turned me inwards to a vivid universe of safety, security, and dreams, and I never came back out again, not really. It’s so nice in there. I visit the real world from time to time to teach and socialize but the rest of my life is spent in that stunning cathedral of daydreams. The crossover between dreams and reality is surely music so, music is what I have always done. Sound waves and resonance recreate my universe so, I live in music as much as possible. It is my safe place.

The exploration of the world through sound transforms the bizarreness of realness into something I can feel and understand. In sound, the world makes sense. People make sense in music, too, especially their emotions. I use music to process difficult feelings and experiences, sometimes explicitly, sometimes in private, often masked, always transformed. Fear becomes harmonic palindromes, insomnia becomes arpeggios and a trumpet line, sadness becomes a bird call, death becomes harmonics in the sky. When talking through music I can get people to hear and understand what I’m saying. Musicians are willing to look deeply into scores; more so than when they see into people. I tell my friends what I have to say by handing them charts for interpretation. It’s more effective communication than speaking out loud. Even if the title is ambiguous, they still know what I mean. In music I can share my inner world and make sense to those I care about. I look different when seen through the prism of sound.

I don’t mind being confronting with my work. I don’t mind being accused as ‘safe’. Genre means little to me except as a community of writers who share a common vernacular. All music is valid to someone even if it’s only the person who wrote it. If it’s personal music, why is that a problem? Is music only valuable when it’s loved by many? I don’t believe so. Although I can be critical at times, I prefer not to be a music snob. Every musician on the planet has something of value to offer to someone. We all have a voice. But who is listening?

Music is so all encompassing for me that I often ask the question, what would the real world sound like if it was depicted in art? To answer this, I take objects of fascination, like leaves, clouds, or oceans, I capture them in some type of art form such as drawings, paintings, ink blots or photographs, then apply musical parameters to the abstractions just to see what music can come out of it. While I explore and create music using various art practices, using transparency paper is one of my favorite ways to work because I can apply different layers of information over tracings or sketches while preserving the integrity of the original. For my first orchestral piece X-ray Baby, I used x-rays and ultrasounds of my babies to create a sound-world of the hospital environment.  I traced around the shadows of my little one’s internal anatomy to extract linear shapes that I then applied to a manuscript to create musical material out of the graphic tracings. Instrumental techniques and expressive parameters were applied to the graphics, and these became the basis for the piece. Arcko Symphonic, directed by conductor and percussionist Timothy Phillips, have performed and recorded the work on two occasions. Although it is a quasi-improvised graphic score, I was deeply satisfied to hear that the material sounded consistent across the two performances, and even more gratified that the work sounded like it did in my head while I was creating it. It was clarifying to reach the understanding that graphic notation can actually be specific, and can achieve consistent, predictable results. The experience of working on this piece encouraged me to further explore and develop the graphic notation systems I have now used in multiple works.

The shapes and hieroglyphs I apply to scores are roughly based on the underlying visual structures and idioms used in classical theory and so, they seem to make intuitive sense to musicians trained in the western system. Over time, I have seen that these graphic scores enable musicians to access to a deeper level of performative expression within their skill set. Without the constraints and stress of accurately reading and replicating conventional notation, the musician can speak straight to the dramatic content of the work. When specific pitch and rhythm are arbitrary, accessing the musician’s performative expression takes priority over theoretical interpretation. Feedback provided by musicians who have worked with my graphic scores report that the freedoms provided by the notation system allow them to access heightened technical facility. The western notation system was not originally designed to support the complexities of contemporary music and achieving rhythmic and gestural freedoms using conventional notation can look diabolical on the page, even in cases where the musical outcome appears to be quite free and simple. The visual impact of high complexity scores can be a significant barrier to a freely executed performance. In an effort to alleviate this appearance of difficulty, I remove the stress of conventional sight reading, and hopefully the fear of failure that conventional notation triggers (thanks to ‘perfection = success’ conditioning) and use intuitive guidance to access the musician’s virtuosic artistry instead. I find I get better performances this way, including from myself when working as a cellist.

When a composition requires detailed, specific, pitch, time and rhythm, graphic scores have their limits. In these instances, the established language of conventional notation is best used. Even when working with conventional notation, my writing is mostly intuitively derived. I enjoy using strategy as long as it’s flexible and ill defined. As an improvising cellist I learned about real time composition and trusting the divine. I am cautious with editing. My rational brain knows less about beauty than my spontaneous errors. I rely on mistakes and chance synchronicity. Throw it at the wall and see what sticks. Do I like it, Yes or No? I trust the first idea to be the most original one. Everything else is a cover. I feel I must be the only composer who openly professes to love the cut and paste function as a compositional tool. Take a sample, copy bits (not all), throw them in another stave, switch things around a bit, maybe transpose a section, see what it sounds like, did anything good come out? Not always, but often. It’s what I do when I can’t hear what comes next; muck around with material until something sits, like a kid in a sandbox. I do this at night in my mind. Lying in the dark playing chess with random sounds. It’s good practice for 3D auditory imagination. Who needs television when you’ve got a portable orchestra in your head?

Another way I make sense of the world is to transcribe real life sounds, like forests or rain, surf or air, and use them as a basis for a piece. The piece I am currently working on I hear you, like Rain for a percussion octet playing 37 chromatically tuned cowbells, is a minimalist transcription of summer rain on a tent. I wrote this piece in Walkerville South Gippsland during a storm while on holiday with my kids. The rain sounded like speech patterns. It was cosy and comforting and I tried to emulate the secure feeling of immersive regularity using repetition and gradual variation in this piece. Everything has patterns. Patterns are easy to replicate. Patterns are easy to recognize and identify. Patterns have commonalities that reach across the universe. They connect us to the outskirts of what we know. Fractals are maths expressed in beauty. So are harmonics and rhythms. The more complex the sequence, the freer it sounds. Metered rhythms sound like the peopled world. You can hear the structure, the joins, the materials, the planning and the shape. The constructive elements are presented like interior design; elegant, clean, orderly, but not abandoned or wild. Nested rhythms are like flowers, ferns, petals within buds, or snowflakes. Sound organized into rhythm and pitch is one definition of music. Sound appreciated through an emotional or conceptual frame, is another. What if everything is music, but we’re just not listening with the right mind? What if our concept of music has become too narrow to really hear the connections of the divine? Is our perception so conditioned that we can no longer comprehend the natural rhythms of the earth? Doesn’t the raven hurt your heart, just a little bit? What does it say? What if I transcribe it for viola? Can you hear the music now? Music is not manmade. We only replicate it. But by doing so we access and participate in the natural systems of the universe. 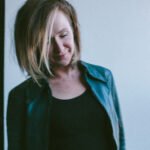 Caerwen is the artistic director of Silo String Quartet, founded in 1998. They have over 20 years international touring experience performing new works of highly regarded Australian contemporary composers. Tours include USA, Western Europe, Scandinavia, the Balkans, South Africa, Japan, Taipei, New Zealand, and extensively across Australia. Caerwen also works in theatre, film and television as a composer, cellist and actor. They have composed for feature film and art house short films, some of which have won international film awards.