INSIDE THE MUSICIAN. Deborah Cheetham: One Day in January, Finding Dutala

I have a feeling next January will be like no other I have experienced in my lifetime and I can’t tell you yet if that will be an entirely good thing or not. There is however one shining, glimmering beacon for me and that is One Day In January, or ODIJ as it has become affectionately known in Short Black Opera circles. What exactly is ODIJ? Let me take you there.

In January 2018 I had the great good fortune to meet Chi-chi Nwanoku. Life has a way of  sometimes leading you to a revelation and this was one such occasion. I had read about Chi-chi’s work as the Founding Director of Chineke! only days before we found ourselves together attending  a function in Perth, WA* (formally known as a state of the Federation of Australia!)

The event was the launch of the 2018 WA Ballet Company Summer Season. I was there as a guest artist for Milnjiya, Milky Way– River of Stars – a ground breaking collaborative work by Larrakia choreographer Gary Lang featuring dancers from Yirrikala alongside soloists and corps de Ballet from WA Ballet. I am sure you will be relieved to know that I was not there in the capacity of a dancer but rather to create the role of Spirit Caller and sing Górecki’s devastatingly poignant Symphony of Sorrowful Songs. This is one of the most rewarding collaborations of my career as a soprano. The ballet centre in Maylands was humming with the joyous sounds of the Welcome to Country that day when Jessica Machin (CEO, WA Ballet) took my arm, leading me away from a table of un-ballet-like pastries explaining that there was someone she felt sure I would enjoy meeting. So this is how I came to know the powerhouse that is Chi-chi Nwanoku and the seed of inspiration was planted.

We spoke at length in a style of conversation which would more adequately be described as a duet – so similar were our perspectives, journeys and goals. We discovered numerous similarities between Short Black Opera and Chineke!: our dedication to creating educational pathways for young marginalised musicians, the struggle for recognition and acceptance in the world of classical music and our determination to break down barriers for our talented artists. However one significant difference would become obvious almost immediately: whereas Chineke! was formed from professional orchestral musicians, the likes of Sheku Kenneh Mason, Short Black Opera had started with singers who had only their voice, raw talent and utter dedication. When we established our company we began with singers who, for the most part had not completed any formal vocal training. SBO provided the necessary training over a period of five years while creating the opera they would eventually perform. This difference aside I knew there was much I could learn from this pioneer for equality in orchestral music and so my journey to establish an orchestra for professional ATSI musicians began.

You might be forgiven for thinking that the title and subject of this article pertains to that January meeting – given all of its significance. However the meaning goes far deeper. Like many Australians, January is for me a time of summer traditions and a chance to recover from the joyous madness of the festive season. Pre-Covid it was the only time a jigsaw puzzle would see the light of day in our household, claiming exclusive rights over the dining room table. Peter Jackson’s brilliant Lord of the Rings trilogy Director’s Cut would provide the soundtrack to our lives over three precious days while on the streets below our apartment a battalion of Kia’s on St Kilda Rd would signal the start of the Australian Open. There is something so reassuring about this succession of predictable events and yet for me and for so many Indigenous Australians late January is one of the toughest times of the year.

At one time or another and to a greater or lesser degree, all Australians will be confronted by the question of January 26 – Australia Day. This perennial torment for many Indigenous Australians has in recent years come sharply into focus as one by one, local councils see the pain inflicted by the casual celebration of genocide and dispossession and vote to opt out. I’m probably on the brink of losing one or two readers over this point but if you will stay with me I think we can end up on the same page. Personally I think that we could find a much better date on which to celebrate our nation’s many achievements. The date on which Arthur Phillip raised the Union Jack a hundred metres from Sydney cove declaring that since the land was empty (Terra Nullius) he claimed it in the name of mad King George the 3rd is, in my opinion, a poor option. For as long as January 26 remains a day of national celebration, in spite of all we know, I must do my best to respond. That response is ONE DAY IN JANUARY.

ONE DAY IN JANUARY acknowledges January 25, 1788 as the last day of true self-determination for the First Peoples of this continent and it is on this day that I decided it was time to bring together Australia’s own version of Chineke!. This would be the beginnings of Ensemble Dutala . Bringing together members of Australia’s first ATSI-led ensemble on a date of this significance is an important statement. We are here. We will be heard and we will be seen.

So it was that Australia’s premiere ATSI chamber orchestra: Ensemble Dutala was born. Its purpose is to create a culturally empowering environment where First Nations orchestral musicians thrive, while at the same time creating a pathway to careers in orchestral music for young ATSI musicians around Australia. Music and the arts are an essential part of Aboriginal and Torres Strait Islander identity: a way of knowing the world and giving meaning to everything in it.

IN 2021 ODIJ will expand to a three-day summer intensive based at Monash University in Melbourne. Young ATSI musicians who have reached a level of proficiency on an orchestral instrument will be eligible to apply for an ODIJ Scholarship through Short Black Opera’s Stronger Voices – Better Choices initiative. The scholarship funds will bring successful applicants to Melbourne for intensive training while working alongside members of Ensemble Dutala. In partnership with leading arts organisations such as the MSO, Orchestra Victoria and our tertiary education partner Monash University, Short Black Opera will support Ensemble Dutala’s role in addressing the lack of representation of Indigenous musicians in our nation’s orchestras and classical ensembles. This development comes at a critical time. As more ATSI composers are commissioned to create new works featuring elements of language and culture, the need for an Indigenous-led ensemble of trained professional musicians to perform these new works also grows.

From the ODIJ project, SBO has identified an ensemble of 9 ATSI (Aboriginal and Torres Strait Islander) musicians who, under the leadership of Ensemble Dutala Director Aaron Wyatt, will form the core group for our 2021 season of performances (stay tuned for our November launch event).

In the same way that SBO has embedded Indigenous opera into the Australian Arts landscape, this project will change the status of Indigenous orchestral musicians, developing a program for future generations of ATSI children, built on the premise that ‘if you can see it, you can be it’. Our ensemble includes representatives of the Yorta Yorta, Noongar, Kala Kawa Ya, Kiwai, Motu, Lardil & Yangkaal language groups. The founding members of Ensemble Dutala are Director Aaron Wyatt (Violin/Viola), Baden Hitchcock (Violin), Maya Hodge (Violin), Zeena Tesoriero (Violin), Preston Clifton (Cello), Allara Briggs-Pattison (Double Bass), Jessica Hitchcock (Bassoon/Piano), and Rosie Savage (French Horn). I have even retuned to my beginnings and dusted off the Muramatsu (Flute); you see I didn’t start life as a soprano or a composer but as a humble 3rd flute in the Sydney Schools Symphonic Wind Ensemble.

Inspired by the language of my grandmother I chose the Yorta Yorta word Dutala, meaning Star Filled Sky, as the inspiration for this ground breaking ensemble. If you feel that you have heard the word Dutala recently you would be correct. In the few weeks between lurching from Bush Fire disaster to international pandemic the Melbourne Symphony Orchestra launched its 2020 season with Dutala, Star Filled Sky as my first commission as Composer-in-Residence. For a long time, I considered the addition of a subtitle for this work – the spaces between. For this is where Indigenous cultures focus their attention when interpreting the sky. The spaces between the stars. Perhaps this is why my attention is fixed on those gaps which remain in our major arts organisations and on developing opportunities for those spaces to be filled by the vast array of talented and dedicated ATSI musicians still waiting to be heard.

(You can read more about this work in the Short Black Opera Newsletter – January to March 2020 by clicking this link.) 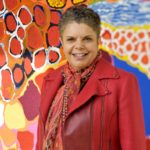 Deborah Cheetham, Yorta Yorta soprano, composer and educator has been a leader and pioneer in the Australian arts landscape for more than 25 years. In the 2014 Queen’s Birthday Honours List, Cheetham was appointed as an Officer of the Order of Australia (AO), for “distinguished service to the performing arts as an opera singer, composer and artistic director, to the development of Indigenous artists, and to innovation in performance”.

In March 2015 she was inducted onto the Honour Roll of Women in Victoria and in April 2018 received an Honorary Doctorate from the University of South Australia for her pioneering work and achievements in the music. Ms Cheetham’s Eumeralla, a war requiem for peace, premiered to sold out audiences on-country at the Port Fairy Spring Festival in October 2018 and at Hamer Hall in Melbourne with the Melbourne Symphony Orchestra on June 15, 2019.

Deborah Cheetham is the 2020 Composer-in-residence for the Melbourne Symphony Orchestra and commenced her appointment at the Sir Zelman Cowen School of Music, Monash University as Professor of Music practice. Deborah is the 2019 winner of the prestigious Melbourne Prize for Music and was named Limelight Magazine’s Critics Choice Artist of the Year for 2019.