INSIDE THE MUSICIAN. Chris Cody: The Music Inside

In the beginning, a sound. A pulse. A heart beat. It all begins with rhythm. And there is this warm red-black light, like looking at the sun through eyes closed…

Is it that pre-birth memory nonsense again? No one believes me. “It’s impossible”, they say. “You dreamt it”! I’m always dreaming.

So how do you talk about music?
You can and you can’t.
You make music.
It’s always seems paradoxical to talk about it.

Music … The word sounds silly if you repeat it enough.

When words fail, music speaks. What I will say is that music makes me laugh and makes me cry. Music makes me want to believe that everything will be all right, that there is love, and beauty and meaning in this cynical, cruel world. Since I was little, music has made me feel both different but also at one with the world, with life. The before and after. Music makes sense out of the disorder. It makes life plausible. It transports me and affirms me, it redeems my life. In music, I am.

I’ve just read the latest news in Australia – further cutbacks to studying arts and humanities, the cost of an arts degree will more than double, while the ABC has had its budget slashed further. More music programs are cancelled that support not only Australian artists but bring the music and ideas of the whole world to us. What’s going on? Can the government not see the importance of the arts, understand what we understand? Do they not share in the wisdom, truth and beauty of music? Doesn’t everyone know that playing, writing or just listening to music reminds us of the truth we so easily stray from, of what is really important in life and death?

Listen to music, more music! When words fail, music speaks. Lets seek it out, let’s travel. Jack Kerouac the writer-traveller said the only truth is music. I’ll travel and meet other cultures, learn other languages, and learn more about music and life. And we can all travel, even in our imaginations, during these pestilent times.

A memory: I remember hearing Joe Henderson Quartet, at Fat Tuesdays, not long after leaving Australia and arriving in New York.

The club was packed, hot and stuffy, and there was an air of anticipation and restlessness. The band walked on and I remember noticing how small Al Foster was and also that he was wearing leather pants! Joe counted off and they just lifted off.  They sizzled and burned from the very first note to the last. There was this amazing, furious energy they put out.

All the band members played with a terrible intensity, as if their lives depended on every note, which they did, and that nothing else mattered, and it didn’t. They played from their guts but with a great concentration at the same time. The sort of music we all try to play. We all learn the technical side, hone our craft and skills and then try to forget everything we’ve learnt, to transcend and play abandoned, in a state of grace.

I looked around. The audience members were either sitting with their eyes shut, simply gob-smacked, or doing this sort of moaning and groaning along in ecstasy. After the concert, I was knocked out, destroyed in the best way, and burned by the fire these musicians lit! These musicians rose up singing and spread their wings.

Now I‘m here in France. Being an incurable romantic, the place, the culture have always fired my imagination.  It’s been my waking dream. My guiding light and my fleeing from death. And didn’t a Frenchman, André Malraux, say all art is a revolt against man’s fate?

I hear Messiaen playing the organ alone in a Paris church.

I walk in the footsteps of Beckett, Hemingway, Miller, Orwell, Picasso, Dali, Stravinsky, Wagner, Dexter, Kenny, Chet, and Bud Powell – their ghosts are still wandering the streets and sitting at the bars. I’ll drink what they’re having! And I’ll starve if I have to because music will nourish me.

I listen rapt to the ney players in the greasy bars around Stalingrad who could drop into a mystical trance with the ease of Coltrane, the kora players and griot musicians in the 18th arrondissement who weave stories until the wee hours of morning. I stay out all night and wander home as the bats return to the bridges and the swallows rise.

I cross the paths of Manu Dibango, Salif Keita, Miriam Makeba, Papa Wembe, Brice Wassy and also Steve Lacy, Herb Geller, Rick Margitza, Marcel Azzola, Sonny Murray and so many more: musicians that grab and shake you with their sacrifice, their generosity, their suffering. They are keepers of the flame.

And they end up in France because art, artists, and “patrimoine” are valued and treasured. It is a right guaranteed in the constitution. Art and ideas go well with the ideals of freedom, revolt, and racial equality that jazz represents.

France has hundreds of funded jazz and classical festivals every year. Jazz is heard everywhere, on mainstream radio and television, in the metro, the streets and even the supermarkets.

In France employers and employees pay into funds for sick and holiday leave, retirement and unemployment. The result is that artists who work intermittently are supported and empowered and can draw upon those unemployment rights when needed. It is simple and effective, and offers huge benefits to society. This happens also in Spain, Italy, Belgium and other European countries. A similar scheme would be welcomed and hugely aid the arts scene in Australia.

I was extremely excited as I made my way to the theatre on the cold and frosty night: at long last I was going to hear my favourite legendary concert pianist whose recordings of Bach, Schubert, Brahms, and all the Russian composers, had given me so much.

I leant forward as he walked on stage, blinked and bowed, and then settled somewhat awkwardly at the piano with a small desk lamp to light the music. He often used the music and he said that it kept him true to the score. His approach was a contrast to many other concert pianists more concerned with display. He began to play.

For the first five minutes, I kept saying to myself, “this is Richter, at last I’m hearing him, how great he is”! But then as the music and his completely self-effacing approach to performance took over, I started thinking about the composer Beethoven, and how great he was. Finally all these thoughts vanished and I just got swept up in the music and its ideas, colours and directions. When the concert finished, I was surprised by the loud applause having forgotten my surroundings, and I walked home in a dream with the music singing for weeks, inspiring me.

Jazz drummer Oliver Johnson asked me one night, “are you ready to die for music”? Oliver ended up homeless on the streets, where he was later murdered. Remembering him, I wrote this:

He wielded the stick and messed with your mind
Could hold it tight or let all hell loose
He could play with the music in full flight,
Make it rise and fall like a small boy’s kite

And late at night with the crowds long gone,
When drowning men rise and float on the foam
He would fix you with his bright black eye
And ask if you cared to die.

His beard gone grey with a hand that trembled
He sat and slept beneath the tree
And shared the bottle of his life
With the stranger and his coal bright knife.

Since the beginning of time we have felt and communicated through the transcendent language of music. As Jimmy Smith put it: “it is, was, and always will be, and all that other shit is here today and gone tomorrow”. 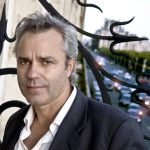 Chris Cody is a pianist and composer who has performed and recorded extensively around the world for the last 30 years while based in France. He has headlined at many international festivals and a vast array of concert venues throughout the USA, Europe, Africa and Australasia. He has worked with musicians including Roy Hargrove, Herb Geller, Sunny Murray, Carla Bruni, Michel Jonaz, Marcel Azzola, Tina Arena, Annie Whitehead, Rhoda Scott, Rick Margitza, and Jason Marsalis.

He has released eleven CDs of his music on international labels and collaborated on over thirty other international albums. He has written for theatre, dance, cinema, radio and TV.

His latest work Astrolabe, a jazz suite for 12 instruments was released in March 2020.