INSIDE THE MUSICIAN. Elliott Gyger: Problem-Solving for Transcendence

Writing music for me has multiple levels of reward.  I am the sort of person who relishes an intellectual challenge – solving a cryptic crossword, or a trigonometry problem – and composing stretches my brain more than any other activity. The task is that much harder because the solution doesn’t yet exist: it has not only to be found, but made. Part of the mystery, though, is that compositional solutions are far from arbitrary. I know when a piece-in-progress is hitting its stride when individual choices start to feel definitely “right” or “wrong”. It’s as if the work is discovering its autonomous existence, under my fingers.

My compositional practice thrives on constraints – tools defining the “problem” to be solved.  These constraints often include an unusual instrumental combination, perhaps featuring neglected instruments (for example, I’ve written concerti for E flat clarinet, celesta, tenor saxophone, and prepared piano); or a non-standard approach to a standard instrumentation, for example by subdividing or spatially re-organizing the ensemble. I usually also make some decisions in advance about formal proportions, tempo relationships, pitch materials and so on. Wherever possible, all of these decisions should in some way reflect the central expressive idea of the work, often encapsulated in the title. None of these decisions remove my responsibility for every subsequent choice about how the details play out in practice – but they may lead me into spaces I would not otherwise have discovered.

I firmly believe that every piece needs to break new ground for me – otherwise I would stop growing as an artist. The act of composing is always for me an aspirational one, and I think this is embodied in the character of the music I write: restless, intense, expressive, reaching for transcendence. I recall a phrase the American composer Augusta Read Thomas has used to describe her music – “lyricism under pressure”. In some of my works that pressure is applied dialectically, so that there is a conflict within the piece between the lyrical impulse and other forces which seek to suppress or even destroy it; in others the pressure comes from within, an urge towards expansion and intensification.

In terms of musical language, my sense of breaking new ground resides not at the outer edges of individual musical parameters, but in exploring what has already been discovered in richer and more integrated ways. Central to my view of music is the role of harmony. The moments that affect me most deeply in the repertoire I love – regardless of style and period – are invariably harmonically driven: an aching suspension, a telling bass-note change, a bracing microtonal clash, a luminous arrival. The sophisticated workings of harmonic gravity are well-understood in the context of tonality, but I am convinced that atonal harmony is capable of comparable nuance and colour. When working on vocal pieces, I find myself tinkering with small details of chordal content and voicing to capture the precise mood for each text phrase or dramatic situation; to me at least these choices seem intensely meaningful. The expressive content of purely instrumental writing may not be as easy to articulate, but the direction and energy of the harmony is equally salient.

Also extremely important is the element of drama, musical narrative and rhetoric.  It is in this area that I suspect my instincts are most conservative, even traditional:  what I am attempting to do is not fundamentally different from the great 19th and early 20th-century repertoire – creating atmosphere, sustaining or releasing tension, building climaxes, plotting surprise twists.  That said, I try to keep things fresh by sidestepping obvious solutions, and sometimes by deliberately manipulating temporal proportions or tempo relationships in counterintuitive ways.  Is it possible to place the high point of a piece one-quarter of the way in, or create a two-minute adagio balancing a twelve-minute prestissimo, or cross-cut effectively between four strands of musical material, each with a different narrative arc? I’m not sure, but I may learn much in trying to make it work.

My exploration of timbre is as yet less developed. I am keenly attuned to the colouristic idiosyncrasies of instruments across different registers and dynamics, and intrigued by the possibilities of hybridisation via orchestration: splicing, cross-fading, and the potential for subtle alteration of loud events by shadowing them with semi-audible, much quieter events. I have also written a few pieces with significant integration of extended techniques – but for the most part they remain extensions, rather than being truly assimilated into my vocabulary. Is this a problem? Not necessarily, but at the moment I see it as a missed opportunity, an area for future growth – as is the incorporation of electronic sounds and live processing.

It seems to me that much interesting music of the last 50 years thoroughly investigates two of these three parameters – harmony, drama, timbre – at the expense of the third.  For example, composers in the modernist mainstream tradition of Henri Dutilleux, Oliver Knussen and the like are great harmonists and dramatists, but treatment of timbre is relatively conventional; the extended instrumental palette pioneered by Helmut Lachenmann offers great possibilities for colour and drama, but virtually abandons harmony; and the French spectral school opens up a rich nexus of interaction between harmony and timbre, but often at the expense of dramatic shape and narrative detail. A music able to explore all three at equal levels of sophistication would be a Holy Grail well worth aspiring to.

So far I have been looking inward ­– discussing the how and why of what I do for its own sake. The writing of music can be an entirely self-sufficient activity, and while engaged in the nuts and bolts of it I am often preoccupied with addressing the specific problem in front of me. Almost everything I write, however, requires the participation of others to bring to life. Alongside the demands of the piece itself, the next vital consideration is the performer’s perspective. This infiltrates every detail of compositional decision-making via the mechanics of instrumental and vocal technique, and the imperative of apt, clear and efficient notational communication. (As an aside, in my experience the processes of composition and notation are so tightly interwoven as to be inseparable – just as in writing a cogent sentence, the choice of vocabulary and syntax actively shapes the argument.)  But this is just the start: at the broader level, I often try to think about how the piece will feel to practice, to rehearse, to perform – what demands I am making and what potential rewards there might be. I am never afraid of writing music which is difficult, but the pay-off has to be worth the effort. Not that I always get that balance right …

My own performing activities (formerly as a choral singer, more recently principally as a conductor) are a vital part of retaining my ability to see things from the performer’s point of view. Interestingly enough, my experience preparing and rehearsing music by someone else has definite resonances with my experience composing: there are considerably more “constraints”, in the form of the completed score, but one must discover and build a performance within these constraints just as one discovers and builds an original piece. This attitude persists even when I am working with performers on my own music (which is hands-down the best part of being a composer). Notwithstanding my inevitably privileged position as the creator of the score, the process feels much more like constructing something collaboratively, on an equal footing, than like issuing instructions from on high. This despite the fact that when composing I am a control- and detail- freak, unwilling to leave room for improvisation of any kind, and often guilty of a superabundance of markings: in rehearsal I disengage far enough from my own meticulously-notated score to treat it as another puzzle for creative deciphering.

The same constructive problem-solving impulse comes to the fore again in my teaching activities.  This is most obvious in individual composition teaching, where my task is to work with students on finding solutions to the challenges they face in writing their own music: I often propose ways forward by imagining that the piece is my own, but at a more abstract level I can try to diagnose problems in the process – what is the student ignoring, or obsessing over too much? Lecturing and analysis, on the other hand, are more like performing: working to find a salient interpretation of a pre-existing work, within a particular context. It’s worth emphasising that there is no such thing as THE correct analysis of any given piece, but the more perceptive an analytical reading is, the more “right” it feels. Really great analysis in my view always involves an element of creative risk-taking.

Finally, what of the audience?? A complex and tangled question, not least because the perspective brought to a listening experience by each audience member is increasingly diverse and unknowable.  After myself, the performers have to be the first and best audience for my music, for two reasons:  they interact with the work for much longer and in much greater depth; and a work can only communicate to a wider audience if the performers are convinced by it. I don’t set out to compose wilfully obscure music (nor do I believe that to be true of the overwhelming majority of composers, regardless of style). Nonetheless, I accept that the music I write appeals to a relatively tiny number of people. While I wouldn’t object if that number were larger, I don’t see a way of solving that particular problem … Shunning broad audience appeal may seem like smug elitism, but the simple fact is that I write what I write and that’s how it comes out. I strive to make it the best – the most convincing, authentic, powerful, elegant – that I can. It will always fall short in some way; but that’s the spur for the next attempt. 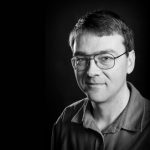 Elliott Gyger studied composition at Sydney University with Ross Edwards and Peter Sculthorpe, and at Harvard with Mario Davidovsky.  He is currently Associate Professor in Composition at the Melbourne Conservatorium of Music.

Among his recent works are an hour-long solo piano cycle inspired by Dante, Inferno (2013); concertos for tenor saxophone (Smoke and Mirrors, 2014) and prepared piano (From Joyous Leaves, 2015); and Acquisition (2016) for the Sydney Symphony Orchestra. Awards include the Sydney Symphony Orchestra 80th Anniversary Composition Prize (2012) for on air, and the 2013 Paul Lowin Song Cycle Prize for giving voice.  His chamber opera adaptation of David Malouf’s novel Fly Away Peter was presented by Sydney Chamber Opera in Sydney and Melbourne in 2015, to critical acclaim.