INSIDE THE MUSICIAN. Mark Isaacs: Creating art while exploring the expanded realities at the meeting ground of science and metaphysics

All bets were off—as far as I am concerned—with the 1935 descriptions by Einstein, Podolsky and Rosen of nonlocality and entanglement at the quantum level.

This was the most important scientific discovery of all. It smashed down the walls among science, religion, metaphysics and the paranormal. And it has direct bearing on the work of a musician like myself.

The great discovery was that at the quantum level there is an unexplained “entanglement” that connects things that are not local. There are sympathetic and instantaneous responses between particles that are too far away from one another for any normal signalling to travel in anything like an instantaneous fashion. Einstein called it “spooky action at a distance” and used the phrase dismissively, because he actually didn’t believe it could be true. Because of this spooky entanglement among particles—that can’t be explained by normal physical connections—it was even theorised that there is only one particle in the universe, a particle that resides in all places at all times. The one masquerading as the many.

In music, on stage, in the composing room, and in life itself, I remain open—as much as I can manage—to this “spooky action at a distance” and try to stay “entangled” beyond my prosaic positions in spacetime. It’s the scientific way!

We now know, through nonlocality and entanglement, that there must be more channels of connection than can be reduced to the technology of our body’s five senses, and hence there are so often better things to listen to, through knowing our actual entanglement, than the chattering monkeys that live entirely locally in our heads.

Of course we are not quantum beings at all levels—our bodies as a whole are not nonlocal—but at the level of thought our neurochemistry brings us already to the lawns of the quantum world, where there is that now-proven nonlocality and entanglement. Once we are entangled and present in that, the ego can become a useful servant, rather than our (and others’) cruel master.

Yes, there seems to be every scientific reason to believe that we are entangled into the very fabric of the universe—at least through our minds, if not our bodies (though they too came up from the earth which was itself formed from the stuff of stars, and so too are they ultimately entangled)—and moreover that it follows that the full range of our consciousness transcends not only the Newtonian clockwork Universe, but even Einstein’s already “spooky” relativistic one.

There’s more: I read biochemist Nick Lane’s recent book The Vital Question and marvelled at the ATP synthase in living cells. It’s how we get our energy (ATP). Basically our bodies pump protons (we are indeed quantum beings) via what’s called a proton gradient over the exposed surfaces of tiny little nanomachines that look like water wheels residing deep inside every cell. The protons flow across the wheels as if they were a current of water, turning the wheels around and around. All this at the subatomic (quantum) level! Thus we create the energy that powers our bodies from little subatomic wheels, like gears, that are driven along by streams of protons!

Nanotechnology is at the very cutting edge of what we hope our science might evolve into, but nanomachines already roam the earth in the form of every living thing here. And so our cells, including our brain cells, have been demonstrated to do their main energetic work in the quantum world, where, again, all is entangled into All. Fascinating, no?

More still: I recently rewatched the 1999 movie The Matrix, with its breakthrough idea that you could live in a virtual reality without knowing it. Our perceived “reality” is given to us by no more than the electrical signals present in the brain. If the electrical signals were changed, we would experience something else again as our reality. This already happens with hallucinogenic drug use and in delusions arising from mental illness.

These transformed versions of reality lack a universal consensus of being real, but there is no reason why a reality that had our own wide consensus could not nonetheless be virtual. Indeed some scientists, such as Thomas Campbell and Brian Whitworth, have theorised that reality as we know it is indeed just that, virtual, like a running computer program (or computer game) that we are inside of. (Their writings are very complex, but for an easily grasped summation in graphical novel form, you can read Alexander Marchand’s The Universe is Virtual.)

Already we know for sure that the universe is not smooth and analogue, but digital; it’s chunky and granular. If it were analogue and smooth there would be no absolute minimum distance and minimum time. But in fact we have found that there are indeed minimums, which are described as the “Planck length” and “Planck time”, beyond which you cannot go any shorter in distance or in time. It doesn’t really resonate with common sense why there should be these minimums.

However, if we were indeed inside something like a computer program and investigating our reality by analysing the “screen”, we would discover a minimum “Planck time” as the “refresh rate” of the monitor (nothing can happen faster than that) and a minimum “Planck length” as the screen’s pixel size (nothing can be smaller than that). I find this an absolutely fascinating analogy.

So I get my jollies at the meeting ground of radical science and metaphysics, which are one and the same thing: Science’s theory of Dark Matter is as spooky as anything in my metaphysical books. In turn, I am ultimately expressing my fascination and engagement with the mysteries of Existence in music.

I deduce my art from these first principles, as far as I can make them out. And naturally I love to turn directly to artists themselves who have marked out their magnificent paths in detail throughout their works. How many similar wonders have I found there!? And what steadfastness they have, even in the face of adversity!

I have even found along the way a scientific basis to ethics, since, like everyone leading an “examined life” (as Socrates put it), I am very concerned with how I live and act in the world. There is the thermodynamic Law of Entropy, which states that all things are ultimately in a state of decay and will break down. High entropy (any form of destruction) is experienced by living things as pain. Non-ethical behaviour is simply a wilful adding of conscious intention to natural entropy. Now that’s a useful idea!

As well as the new science, I study contemporary metaphysical teachings to help order my thoughts, decisions, words and actions, so that they don’t, as often, add entropy into the world that is traceable to conscious intent.

Like a cycle of symphonies, each of these teachers emphasises a different focus, and taken together they begin to add up to a whole; while each work itself may be more relevant to the needs of a particular time in life’s journey.

The Gnostic Christianity of A Course in Miracles stresses forgiveness. Brother David Steindl-Rast’s emphasis is on gratitude. Adyashanti focuses on the path itself, Eckhart Tolle is in “the now” just like Melbourne-born Leonard Jacobson with his “presence” mantra. To name a few.

In creating art, we create areas of low entropy where, rather than things following their natural tendency toward breakdown, living tissues are born and reborn and can breathe and speak poetically (on a good day!) to all those who might care to listen.

They will all pass, all of these good works. It’s as sure as night follows day that we’ll all disappear in time! Not just “we” as individuals but the human race itself, all life, the earth, the sun, the universe.

In the meantime, artists do their own bit to keep entropy lower for just a little while in certain spaces and times, which opens further ways for Love (as creation) to ascend to its perennial starring role on the main stage.

Love being, of course, the ultimate “low entropy state” (and as unromantic as that might sound: trust me, I remain a pathological romantic!).   – © Mark Isaacs 2016 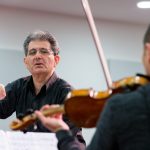 Mark Isaacs is an internationally-acclaimed composer, pianist and conductor in classical music and jazz. He has composed over 100 works and received many awards including the Albert H. Maggs Composition Award and the Jean Bogan Prize for Piano Composition. His first symphony was premiered by QSO in 2013. Last year he conducted the premiere of his chamber symphony with Omega Ensemble and also conducted the Queensland Conservatorium Symphony Orchestra in a concert of his orchestral works. In jazz he has recorded and toured with the artform’s most distinguished international figures and has twice been nominated for the ARIA Award.