INSIDE THE MUSICIAN. Jessie Lloyd: On a Mission

Most people think I got into music because of my father Joe Geia, a pioneer in Australian Indigenous music and composer of the Aboriginal national anthem Yil Lull, but this is not really the case. Dad turned up later when I was about 25. Our relationship was dysfunctional and remained so for the next 10 years. This article is about what really influenced me to get into music.

Music and singing was always a big part of my family, but I still remember when I first started playing. I was 10 years old and living in Adelaide. My cousin Jeremy Geia, now known as Murrumu Walubara Yidindji, taught me my first chords. Lucky for me he insisted I learn them correctly and not be slack. Murrumu’s mother, Aunty Delphine Writer (nee Geia), was also studying jazz at the Centre for Aboriginal Studies in Music (CASM) at the time, so lounge room rehearsals with different musicians were regular events.

The church was the only music I was exposed to until adulthood, except for my Aunty Jenni Geia’s cassette tapes of Tracy Chapman, Sade and The Eagles. We were living in Moree NSW, as my mother Lynelda Tippo was looking to work for the church. There was an old man at church by the name of Wilfred Leavers, from Kuranda in Queensland, who played the gumleaf and has probably passed away now. He gave me his old nylon string guitar and that was my first instrument.

Aunty Delphine taught me bass guitar in Moree when I was about 14. I played for church and the school band and was influenced by Roger Knox. At the age of 15 I did my first gig in Moree, singing Talking ‘Bout a Revolution by Tracy Chapman, with my hair in braids and all! Mum didn’t know I could perform like that till I did the gig, as I was always just strumming away in my bedroom.

I remember the moment I decided I was going to be a musician, sitting in my bedroom in little old Moree town. I felt an overwhelming inspiration and conviction that music was my calling: I remember it clear as day.

Mum got a new placement and we moved to Perth, where they were starting up an Aboriginal bible college. Her colleagues and students were also musically inclined. I was a senior at a private high school in the hills of Perth, a long leap from public schooling in country NSW. I was very lucky to have good mates, the most infamous being my longstanding bestie Andrew ‘Bushy’ Beck. Andrew and I were children of the Aboriginal bible college community. There were a few us, and they were fun times.

Andrew and I ran amok in school, or at least we thought we did. We were also in the school band and choir together. We took music class and I got an F for music— I failed because I didn’t care to learn about old white men and classical music. This was around the time I wrote my first song, a religious song of course as I was told to ‘only sing for Jesus’. There were popular churches where the cool young people would go to worship and praise, kind of like Hillsong but more conservative. That’s where the cool church bands played and I wanted to play bass for the big gigs, especially the youth tent at big camp. I was overlooked or maybe I wasn’t proactive enough… my instinct was telling me I was probably a little too ‘Aboriginal’ to lead praise music for conservative middle class white people in Perth. These church services were the centre of the universe—this is where you were supposed to find your future husband and be set for life.

Being excluded by the musicians at church I lost faith, in more ways than one. When I graduated from school I signed up to Abmusic, the Aboriginal music college in Perth. It was an eye opener. First thing I noticed was Aboriginal boys—and they noticed me. Abmusic was such a rollercoaster ride that really moulded me. I did very well musically but my real schooling was in the life lessons of identity, love and adulthood.

My first boyfriend was a crap boyfriend but a pretty good guitarist. We were in our class band together called The Fireflies. We had some fun times but he really broke my heart. He never liked it when I showed him something on the guitar; I couldn’t show him up in any way and I thought that was pretty lame. I got really turned off by the male dominant attitude I had to abide by – from the church, the music scene and my Aboriginal community. So I went and got me a girlfriend and began my own music career.

And 15 years later, I’ve had an adventurous and successful career so far, with all its highs and lows. I’m up to my eyeballs in Indigenous music as a cultural practitioner and creative entrepreneur and currently working on the Mission Songs Project, which has become a personal journey for me and my family, including my father Joe Geia.

I probably got the music bug through genetics but the influences and experiences also shape us. Mission Songs Project has taught me the importance of history, why we play the music that we do and why we tell the stories we tell. I’ve learned that it is important to know where you’ve come from to help guide where you need to go. Dad and I have crossed paths again and things seem to be going well. I’m hoping we can work together in the next chapter of our careers and again create history.

Sixty years ago, in June 1957, seven men led a strike for human rights on Palm Island, off the coast of North Queensland. In an era of institutionalised segregation and discrimination, the Aboriginal Protection Act saw residents of missions and settlements held under servitude to its white administrators, forced into a living hell where their every move was monitored and reviewed. One man, Albie Geia, was determined to resist and was labelled a ‘trouble-maker’. To the surprise of the superintendent, six other men joined in protest and held the Palm Island Strike.

Mission Songs Project, an initiative to research and revive contemporary Indigenous folk songs from the 20th century, presents a musical journey of missions, settlements and reserves across Australia. Concluding on Palm Island, Jessie Lloyd and her band explores the stories and songs that both predate and supersede these historic events. The YIRRAMBOI performance features Joe Geia, a pioneer in Australian Aboriginal music, son to Albie Geia, and Jessie’s father. Joe Geia connects the past, present and future, a living example of the intergenerational song traditions still practiced by Indigenous people and a senior songman whose hit song ‘Yil Lull’ is widely recognised as the Aboriginal national anthem. 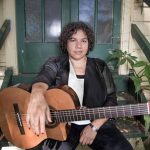 Jessie Lloyd. Originally from the tropics of North Queensland, Jessie Lloyd is an Aboriginal and Torres Strait Islander musician who performs a broad collection of Australian Indigenous songs. A vocalist, guitarist, bassist and ukulele player, Jessie earned her formal qualifications at Abmusic in Perth, WA in 2002.

An award winning composer, performer and creative entrepreneur, Jessie is a cultural practitioner of Aboriginal and Torres Strait Islander music. Dedicated to the continuation of cultural traditions through the presentation of both contemporary and traditional Indigenous music.
Jessie has travelled Australia in search of hidden songs to present this rare Indigenous narrative. From the Bass Strait to the Torres Strait and across the Arafura Sea, Jessie has spent time with Aboriginal and Torres Strait Islander senior song men and women, uncovering precious stories and songs from the mission days.