When I was younger, and beginning to figure out this whole business of playing jazz, I always felt that soloing was the least interesting part of music making.  The part of it I most enjoyed, what really captured my heart and mind, was playing with other people: the interplay of ideas, the connection created by groove, and the bath of sound created in small rehearsal rooms.  When it came time for a drum solo, sure, I would do it, but I mostly just wanted to get it over and done with, so we could get back to the really fun bits when everyone else started playing again. So I’m sure teenage James would be more than a little surprised to hear that mid-twenties James has become more than a little obsessed with solo drumset performance.  The transition happened gradually, and was a mixture of carrot and stick. The ‘carrot’ was discovering and finding inspiration in the solo music of drummers and percussionists including Simon Barker, Phil Treloar, Will Guthrie, Fritz Hauser, Max Roach and Ed Blackwell.  But much more important was the ‘stick’, which came time and again in the course of the completely free improvised performances I was regularly a part of.  I enjoyed this kind of improvising – again, with other people – but inevitably the music would at some point transition to a section of solo, unaccompanied drums.  When that happened I felt like a rabbit in the headlights, and my inner monologue usually went something like this:

What the hell do I do now? Everybody is looking at me…  I can’t just stop! Maybe if I try something I’d play in a ‘jazz’ drum solo… no, that doesn’t seem to work… what about this? I guess this is ok… where to now? I can’t keep doing this for much longer…  Oh, good, someone else has started playing, thank god!

These solo moments presented a challenge, but one rather different to those I had faced before in my prior experience playing other, more overtly jazzy, music.  This wasn’t a matter of a difficult rhythm or complex drum part, which I could take home and practice until I got it right.  This was a more philosophical problem: when presented with silence, how should I break it?

My initial response was to take small cells of information (usually rhythms) and find as many different ways of interpreting them on the drums as possible: on all combinations of drums and cymbals, with sticks, brushes or mallets, at all tempos, at all dynamics, and so on.  As such, when the moment came and I could draw on that particular idea, but still be flexible to whatever musical moment had come just before it. This created some instant success, and I was relieved to feel less lost when the solo moment came.  But I was also regularly seeing (and occasionally performing with) some of Melbourne’s great improvisers, musicians like Scott Tinkler, Ren Walters, Dave Tolley and Scott McConnachie.  Hearing their unaccompanied improvisations made it abundantly clear that I had only really scratched the surface.

In early 2013 I was incredibly fortunate to travel to Japan to study with expatriate composer/percussionist Phil Treloar.  One of the major focuses for our time together was on solo improvisation.   Phil’s method of teaching was one of questioning and challenging me to provide my own solutions, rather than dictating his approach.  Within this, however, elements of his philosophy gradually became apparently.  It would be silly to try and summarise this in a sentence of two (a whole essay to itself wouldn’t suffice), so instead I’ll just say that from Phil I gained the impetus and methods to approach solo improvisation with more compositional rigour and discipline than I had been previously.

(As an aside, that trip was funded as part of a Jump Mentoring grant I received from the Australia Council.  The Jump programme sadly no longer exists, being one of the funding opportunities for emerging artists that have been scrapped due to budget cuts over recent years.)

Upon returning to Australia I began giving my first solo performances.  Combining the compositional philosophies from Phil with my own rhythmic cells provided the starting place for these initial performances.  Slowly I began to feel more comfortable being in complete control of the musical landscape.  What had once felt like a burden (what the hell do I do now?) was now ripe with possibilities (this is great, I can do anything). I now see my solo performance practice as a workshop within which to develop music ideas in a unique fashion, working to my own idiosyncrasies.  This contrasts to my experience of writing music for (improvising) ensembles, where there are certain practicalities that need to be addressed.  For instance, the musical ideas of a piece need to be clearly communicable (probably via some sort of notation), and the scope for (and boundaries of) improvisation needs to be delineated. My solo practice allows me to create pieces where these practicalities can be avoided, and whatever core musical idea I choose to shape a piece around can exist in its own pure form:  be a it a rhythm or melody, a combination of tone colours created from different elements of the drumset, or a feeling of calmness that I attempt to project through selective phrasing.  There is no conduit between the music and myself, so the ideas are as they are, without filter.

Recently I have also been exploring extra-musical considerations as core ideas on which to build solo pieces.  One example of this thinking is the application of physical movement cycles, made by the arms, to the drumset.  I keep these movement cycles simple – circles (clockwise and anticlockwise) and straight lines (back and forth) – but nevertheless, when I map them onto the unique parts of the drumset they creates sequences that are often outside those I would deliberately play otherwise.  When both arms are combined, with their own movement cycles, and this process interacts with the other nuts-and-bolts of drumming (such as sticking patterns and rhythms), bizarre and complex overlapping rhythms and melodies emerge that take me by surprise – even as I play them! Examples of this sort of thinking can be found on the tracks Boubacar and (you never did) The Kenosha Kid, from my solo album Counter Clockwork.

It’s a strange and exhilarating experience, as a performer, to know exactly how you are playing something, but not exactly what it is you are playing.  For me this has become one of the great joys of solo performance – I can set a musical course of action, and see where it takes me.  In this way, I feel that much of my solo music is the emergent result of a creative process, rather than an attempt (successful or otherwise) to recreate a musical piece that existed, fully-fledged, in my mind before it existed in the world.

I recorded my first solo album last year, and have been fortunate to have numerous opportunities to perform the pieces from it since.  My most recent solo performance was at the Sydney venue Colbourne Ave, a beautiful space whose days as a music venue sadly seem numbered.  About an hour before the performance I decided that it would be the last time that I performed this repertoire.  The decision came as a bit of a whim, but it also felt right. I was glad that I decided it before the performance, as I was able to say goodbye to those pieces in my own way – they’ve been good to me.

So now I’m beginning to develop a new series of solo pieces, and while I’ve learnt so much, I can’t help but feel a little bit like I’m right back at the start.  I sit down at my drums, where the unbroken silence is deafening:

What the hell do I do now? 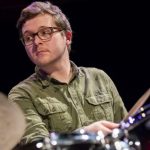 James McLean is a drummer from Melbourne, who works at the intersections of composed and improvised music. Best known as a sideman in the jazz genre, James has recorded with a diverse range of artists including Marc Hannaford, Eugene Ball, Joseph O’Connor and Paul Williamson. He co-leads numerous ensembles, including All Talk, Blind Spot, and Dispositions, and regularly performs solo. In 2016, James was awarded the prestigious Freedman Fellowship, becoming the first drummer to win the award.