INSIDE THE MUSICIAN. Gary McPherson: The journey to musical identity

What do I believe?

It’s quite simple: music is a powerful force in our lives and basic to our human design. It’s one of the things that make us human and distinguishes us from all other species on the planet.

I’m fascinated by how music, as a unique form of language, can be experienced as a symbol system, as organized patterns of sound, and as part of an individual or group identity. And I’m fascinated also by how listening to music and engaging in music can produce strong emotional responses and provide intense pleasure. This is notably so for children and especially adolescents, who actively seek out music during their daily lives.

I’m told the average person living today will spend 13 years of his or her life being exposed to music. I’m just a little sad that so much of this time will be spent passively listening to music rather than being actively or consciously involved in making music. I have always believed that access to a music education and to opportunities to develop one’s musical potential is a basic right of all humans and especially children.  My frustration as a music educator however, is that the resourcing of music in our schools here in Australia is often well below some of the most innovative and forward thinking nations internationally. We’ve got a lot of work to do in order to make sure all Australian children have much better opportunities to learn music during their school years.

What gets me out of bed of a morning?

The research that I have undertaken over a few decades seeks to answer one basic issue: When a child starts learning an instrument how does that child come to perceive him or herself not as learning trumpet, or learning piano, or learning violin, but as a trumpeter, pianist, or violinist. I’m fascinated in the process of how young music learners acquire a sense of musical identity when learning music and what drives them to want to succeed in music.

I remember as a young boy growing up in a small country town how quickly I fell in love with music. But why did this occur? My hunch right now, after I sift through all of the research findings I’ve published across more than three decades is that it boils down to one important issue. Students who succeed in music are those who can imagine themselves as musicians into the future.

I wanted to be a trumpet player because I had a very clear sense of what trumpet players did and what type of career I might have into the future. At the time, I was not only playing the local town band, but also listening to a lot of music, especially Herb Alpert and John Robinson (former principal of the Sydney Symphony Orchestra). I remember sitting in my bedroom at home playing the albums of these two very different musicians and others over and over.  I literally wore my record collection out!

The average child learning music today however, isn’t necessarily aware of the journey. Take, for example, a child learning trumpet. He or she might see other children learning the instrument or a teacher who plays, but rarely are there opportunities for many children to see or hear professional trumpet players on radio or TV or get a sense of what it’s really like to be a performing artist. Consequently, there are few if any opportunities for the child to project himself or herself into the future and feel what it might be like to play the instrument beyond the school years. This is very different from sport and most other jobs where the images are very explicit.  Children know what athletes do, and what a doctor, mechanic or shop assistant does. Apart from popular music, the images of musicians aren’t as explicit and accessible.

Another complication in music learning is the niggling self-doubt about music as a career. When I was working in the USA, I interviewed some of the most talented and committed young musicians I could find in the state of Illinois.  Some of the students played in pop groups and were recording songs played on commercial radio, while others were principal players in prominent ensembles like the Chicago Youth Symphony. These were amazing musicians but every one of them was worried about a career in music because of stereotypes such as low pay, competition for jobs, and a demanding life style. These self-doubts often resulted in a contradiction between how the students felt about music right now and whether they felt they would still feel the same about music well into the future. For example, one 16 year old flute player provided this amazing quote:

Music motivates me. It consoles me and excites me. It’s an intangible means of improving my life; it gives my life more glory than it often deserves . . . It’s important to me because I enjoy it so much. I love the challenge. My entire weekends are eaten up by music. The kids I meet in the youth orchestra are amazing people. I love that companionship. To experience music with others is divine! It’s the most special thing I have.

But when I asked this same girl what she would be doing in 10 years time, she said the following:

My mom is supportive but worried. I think she just wants me to be happy. She likes security. She’s worried that I won’t have a secure position, or my life will be sort of all over the place. She hates that. I’d love to play in a great orchestra. But there is an opening once every seven years, and thousands of people are trying for that one shot. You have to move somewhere. My mom made me promise that I won’t leave this city. She left her parents, and she doesn’t want me to do the same to her. I can always break my promise, but I would like to have options.

In another study, I surveyed almost 30,000 students from 9 different countries to see how students in primary and high school view music as compared to their other school subjects. My team and I found remarkable evidence that school students love and enjoy music, but don’t believe that music is as useful or important to learn in school as their other academic subjects. Even music learners felt the same way.  When we dug deeper into the results however, we found that the music learners were more motivated to study other subjects, particularly the academic subjects, than were non music learners.

For me, this is a much more powerful reason why music is important in schools. Music doesn’t necessarily make you smarter at mathematics or other subjects, but being actively involved in music enriches your life in profoundly important ways, such that you are more likely to feel motivated in other areas of learning and life more generally.

I want every child to have a high quality, sequenced and balanced music education, both in primary and in high school. And if we were to ever achieve this goal, I’d confidently bet that we’d see far fewer problems in schools and a generation of students who were more motivated to succeed during their school years and flourish when they enter their chosen profession.

One of the most beautiful things that can happen to a child is to literally fall in love with music, and especially making music. That’s why I’ll continue my quest of trying to understand how a child starting an instrument gradually starts to develop a sense of him or herself as a musician, and the forms of evolution that enable this to take place.

YOUR COMMENTS are invited. They may be published unless you request that they remain confidential. Send them to loudmouth@musictrust.com.au 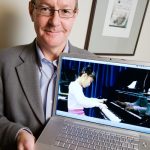 Gary McPherson is the Ormond Professor and Director of the Melbourne Conservatorium of Music at the University of Melbourne. He has served as President of the Australian and International Societies for Music Education, and has published over 150 articles and book chapters, and edited 6 books for Oxford University Press, including The Child as Musician: A Handbook of Musical Development and a new volume to be released this month entitled Musical Prodigies: Interpretations from Psychology, Education, Musicology and Ethnomusicology.