INSIDE THE MUSICIAN. Robert Davidson: Let It All Unravel

It’s a little embarrassing remembering how I became so involved in collaborating. I was invited to participate in a 1998 collaborative experiment conducted by composer Damian Barbeler. He brought together various writers, dancers, musicians, artists, designers and actors and placed us into trios to spend the morning creating a five-minute piece to perform in the afternoon. I was really happy with what our group came up with, but got quite a rude awakening when reading Damian’s report, which detailed the diverse ways the groups worked. He singled out one group as being crippled by the dominating behaviour of its composer – ie. me! I determined to learn how to be a more effective collaborator, and immediately organised with Topology, my new ensemble, a series of projects. We were particularly keen to work with people of different stylistic backgrounds.

It ended up in a long list of collaborations, some of which have continued since the early noughties up till now. I certainly found it uncomfortable at first to cede control of my musical decisions, but staying with it, I’ve found so many ways to grow beyond my limits by embracing differences. It struck a chord when virtuoso Kenyan musician and dancer Sam Okoth told me he’d decided to go to Paris to study ballet – “I had to go to the opposite side of the world to find myself” by working with a tradition very different from his own.

Working with others has had quite a few benefits, including stretching musical abilities and tastes, getting nimbler at negotiating different perspectives, connecting to a wider audience and finding new means of expression. It sometimes has detrimental effects when it doesn’t go well, such as watering things down or someone feeling stifled, but I’ve found those things can be avoided by ensuring clear communication and enough time and trust together.

Even while I was clearly (but unconsciously) holding onto composerly control quite fiercely in 1998, I had been being prepared to loosen that grip for quite some time, particularly since two encounters in Irinjalakuda, India in late March 1992. The first was a long conversation with New York theatre director Lee Breuer (b.1937-d.2021). My wife Kylie and I, both in India to study vocal music of Kerala’s temple and dance-drama traditions, were roaming about the state to attend all-night bonfire-side performances, inevitably in the company of Lee, who shared our interest in these extraordinary ancient artforms, some of which have a continuous history dating back to the time of Sophocles.

Lee’s interest had a long-standing influence on his practice. He had started the Mabou Mines company with Philip Glass, amongst others, in 1970 (Glass had, it turned out, visited many of these villages in the 1960s, leaving a big influence on pieces like Einstein on the beach). He warmed to us when he found out we were headed to visit Glass in New York after our year in India, and we spent many long evenings together. One of these involved a lot of soul searching, prompted by Lee – was I going to be a musicologist studying Indian music or a composer? A composer, I decided. If you’re going to be a composer, you should do what Coltrane, Charlie Parker and pretty much every excellent artist did – go and seriously hang out with the best musician you can think of – who is that? Terry Riley, I answered. I’d been completely absorbed in Riley’s works for the Kronos Quartet – they struck me as both timeless and completely fresh, and extraordinarily expressive and musical.

So I found a way to study with Riley – thanks belong to Riley for graciously taking me on, to Peter Sculthorpe and Sarah Hopkins who put me in touch, to Richard Mills and Patricia Pollett for supporting the Churchill Fellowship, providing the opportunity to spend most of 1995 with Riley in California. After becoming famous in the mid-1960s for his pioneering minimalist classics, Riley had been focused almost exclusively on improvisation for many years, and it took quite a lot of coaxing by the Kronos Quartet (as the 1980s dawned) to get him to write ideas down for them. We improvised together daily, and he talked a great deal about the need for spontaneity. He also frequently talked about being open to ideas, rather than controlling them. “Every day has its tune”, he would say as we went on long walks through the Sierra Nevada hills near his home (“Sri Moonshine Ranch”); “you have to be ready to catch it. If you think you’re in control, you’re fooling yourself.” So this was one area that had prepared me not to hold too tightly onto control.

The other loosening-up event in Irinjalakuda was encountering one of the best musicians I’ve ever heard. I’m not referring to the legendary and mindblowing performers I listened to live (and was lucky enough to meet) around the same time, including Amjad Ali Khan, Bombay Jayashri, Yesudas, Mangalam Muthuswamy, U. Srinivas, K.S. Gopalakrishnan and Dr Balamuralikrishna, but to a singer almost completely unknown. It’s probably illustrative that I don’t even remember his name. He devoted himself, Bach-like, to his craft daily and eschewed fame and praise, contented to sing the very best he could as a devotion of faith, and to pass this on to his students. I found it very inspiring and liberating, and a great challenge to the norms surrounding me – that the whole point was to become “successful”, ie. gathering accolades and renown. Here was an alternative – for the music to be its own reward, and a service to God and the immediate community. It’s been a model for me since.

I only recently worked out why I got into music in the first place, and before I go into detail, I’ll give a trigger warning, since it involves childhood trauma. Now that Grace Tame is the Australian of the Year, it’s a good time to talk publicly about these things rather than keeping them in the shadows. I’m going to indulge in some pretty intense self-revelation, so take care as you read on. In late 1975, when I was nine, I was sitting on a coach travelling from Canberra to Sydney for a school excursion. On the radio played a new single by ABBA, S.O.S.. My vivid memory is of being completely transfixed by the sounds, the swirling harmonies, and Agnetha’s plaintive vocal expression. I lost myself in this music. A day or so earlier, a 37-year-old man, a “family friend”, had sexually assaulted me for the first time (he would continue this over three years). For decades, I minimised this experience, until I had a massive trigger in March 2019 watching Leaving Neverland (I’ll leave aside the controversy surrounding this film – the point is I was triggered). The depiction of Wade Robson, shown in his Gold Coast home at nine, unleashed a huge traumatic response (starting with the recognition, “What? I was just a little kid?”) and endless flashbacks for the last two years.

ABBA provided solace for me as a 9-year-old faced with trauma. From then on, music was my huge comfort and a place to go, along with my faith. It was a space I could occupy, a place I could be myself, and feel safe and emotionally complete. It still is. A huge part of my response to the emotional wounds opening up so profoundly in 2019 was to lose myself in music daily. I listened each day to a new decade of music, starting in the 1190s with the Notre Dame school of Pérotin and Léonin and ending up in 2020 (I made a list if you’re interested: https://tinyurl.com/45mysrc6). Each day was like jumping into an endless ocean – a place I could occupy, with a great deal of room to move. I also continued my improvisation practice, which is how I start each day – not as a way to come up with ideas for composition (though it’s actually where most of them come from), but as a way to feel connected and safe.

So what am I trying to do with creating music? My aim is to be as honest as possible in capturing emotional states as they are for me, and to make something I love. I think Steve Reich hit the nail on the head in an ABC interview with Mairi Nicholson in 1987: “I write what I want to hear. My supposition originally was, and still is, ‘if I love it, maybe you will too’. It’s been nice to find out a lot of people feel the same way I do…I want people to love the music.”[1] It’s nice if the music is clever, innovative, fun and other things as well, but those aspects are more the icing on the cake for me than the driving motivation. I don’t trust my music enough to put it out there unless it’s moved me, and I’ve been very gratified to find for every piece in the last few years that there are listeners who’ve been moved to tears – this means a great deal to me.

The emotions I’m channelling are often stimulated through storytelling, where my focus is simultaneously on communicating dramatic elements and on reflecting my emotional response to the story, but avoiding didactic or proselytising stances. My favoured storytelling medium is speech melody, particularly in works such as Airwaves, The singing politician, and Stalin’s piano, all of which have been collaborations with wonderful performers, and each of which focuses squarely on finding melody in recorded speech. I’m fascinated by what is communicated behind the words in our daily spoken utterances – I think if we can listen to the underlying intonation (the melody), we can connect with deeper unspoken meanings. Music seems particularly useful at intensifying these meanings, and at expressing them in an immersive way; I find it immensely beneficial to immerse myself in music so that I can express emotions without being dangerously overwhelmed by them. I think it’s actually kept me alive.

Robert Davidson, Not now not ever. The Australian Voices, conducted by Gordon Hamilton. Film by Miki Clarke. 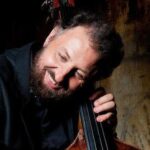 Robert Davidson is a prolific composer, bassist, lecturer and founder and artistic director of Topology. Davidson studied composition with Terry Riley in California before completing a composition PhD at the University of Queensland. He previously studied South Indian vocal music in Kerala, India. Davidson’s compositions are regularly performed, recorded and broadcast around the world, in venues including New York’s Lincoln Center, Sydney’s Opera House and London’s Barbican. All of Australia’s professional orchestras and many leading soloists and ensembles have commissioned and performed his works. With Topology he has released 14 albums, and has directed numerous artistic collaborations with creators of many varied cultural and stylistic backgrounds. He has scored two documentary films: Joyride (Fifty Fifty films 2018), and Strong female lead (Northern Pictures, 2021). Dr Davidson is the head of composition at the University of Queensland and his research is in artificial intelligence and music, music theory, collaboration, music literacy and music education.