INSIDE THE MUSICIAN. Lachlan Skipworth: 2020, the year they started to sing

Note down 2020 as the year people began humming my music. They usually don’t. This implied that a fundamental change was afoot, so I write this article to examine the recent shifts in my musical ideology. It offers both a chance for me to take stock, and a window into my work in a broader sense.

My compositional thinking seems occupied by considerations of balance, both between simultaneous ideas and across the architecture of a complete work. And this year I find myself applying that same instinct across my whole practice. In particular, I’ve been thinking deeply on how to align my creative process more tightly with those fundamental pillars of our art: performing and listening. I’ve sought a stronger understanding of both aspects in the hope that balancing them with my own creative desires will allow my music to communicate more boldly.

For me, listening is the pursuit of those goosebump-inducing moments of musical ecstasy called frisson. Creating such musical chills continues to challenge me differently in each piece I write. But I wanted to re-examine why simply hearing music has such a strong psychological effect on us. Beyond how much I just love listening, I couldn’t explain for example, how it comforts me when I’m ill.

My search led me to the writings of David Huron, and I draw some of the following points from his book Sweet Anticipation: Music and the Psychology of Expectation. Huron outlines how our brains reward us with “positively-valenced” emotions when the music we hear makes sense to us.

Repetition is fundamental to music as it facilitates pattern recognition and therefore understanding.

However I was interested to learn how the pleasurable response is lessened if there is too much musical information (confusion) or too little (boredom). This goes some way to explain the genius of Bach – his music is perhaps the greatest example of consistently finding the “sweet spot” for our brain.

We also know that musical pleasure increases with familiarity. And that the music of our own culture resonates the most with us. But my imagination was aroused by the following revelation from Huron’s work. One analytical study showed that the “white” notes are more prevalent across western music than the “black” notes. Amazingly, a statistical correlation was found in the confidence of people with perfect pitch to name those same “white” notes. Put simply, the participants had a stronger familiarity with the notes that occurred more often in music.

Now few of us actually have perfect pitch (and I certainly don’t!), but I begin to wonder- do we all share such latent statistical familiarities across the various elements of music? And therefore what actually is the common lived experience of music listening in our society? I don’t intend to answer that question here (I’ll outline my creative response later), but I suspect it is different to the learned experience of us classical musicians. And as an aside, I think it’s worth pondering for a moment the implications here of not teaching the canon in our schools.

As a rarely-performing and reluctantly-conducting composer, I tended to neglect the simple joys of performance in pursuit of my “sound”. But I have come to see performers as the champions of our art, and wanted to reconnect with their world. As a young clarinetist I was lucky to learn works by the great composers – Brahms, Mozart and Poulenc being personal highlights. I learned the art of chamber music playing in my high-school wind quintet. And later learning shakuhachi allowed me into the blissful world of the anonymously composed solo honkyoku repertoire.

But I suspect this love of shakuhachi led to my neglect somewhat. Because sculpting the timbral change of a single shakuhachi note is a fundamental challenge in itself, similar to a Japanese calligrapher spending their entire lifetime perfecting the single stroke of the character “one”. However this doesn’t translate so well to playing other instruments or to singing. A recent case in point is my Hymns in Reverie for the Philharmonic Chorus of Tokyo. It achieves the beauty I envisaged in the calculated morphing of its harmonic structures, however the technical demands on the singers are extreme, especially when compared to any joy they derive from singing it.

In remedying this I sought something beyond what I’d learned from orchestration textbooks – they seem to tell us what is possible and idiomatic to play. But I wanted to pinpoint what elicits the pleasure of performance, and what makes a performer want to delve deeper into a piece. Could I find the patterns of notes that make a particular instrument truly sing? Again, Bach’s music shines here in how its lines excite the very fibres of our wooden and metallic instruments. Oh to be a cellist if we’re to be locked down again! Ensemble playing too has its own unique gratification, that palpable satisfaction of playing together, musically and socially.

If you’ve read this far, you’re probably expecting me to now argue in support of a conservative shift in my musical language. I’m not here to do that. My creative urges remain fierce and independent. But I take full responsibility to align my explorations more closely with what moves listeners and thrills performers. Even before this year our audience has been shrinking dramatically. From now the onus lies upon us to win our place in contemporary society by communicating the unique beauty of our instruments and our music.

The remainder of this article outlines my musical response to the musings above. Most significantly, I believe subtle adjustments in how I use musical patterns to be the root cause of performers and listeners beginning to hum my melodies all of a sudden. I hope these mental “mini-performances” build familiarity and a desire to perform and listen to my music again.

The goal of my Flute Sonata was to fill the brain with sound, to engage the optimum mental capacity of the human auditory system. The busy and frantic lines create a radiant aural spectrum and present a visceral yet melodic challenge for the performer. My short Piano Quartet no. 2 forms the music for a choreographed VR dance film. It was a pleasure to work in a more filmic style, but I avoided the senseless use of ostinato that so drags the genre down. Again I prioritised creating a full listening puzzle, and made simple adjustments to my language in ensuring the musicians’ parts moved. These decisions were immediately vindicated in the expressive performances that resulted. Even the film crew hummed along on shooting day.

Two major works from this period receive their postponed premieres next year. My Oboe Quartet for Diana Doherty and the Streeton Trio pursues buoyant textures and a true chamber music dialogue, premiering nationwide with Musica Viva in March. Performances of my quintet for Genevieve Lacey and the Australian String Quartet will be announced soon, and writing the work revealed to me the unique expressive qualities of the bass recorder.

But perhaps the steepest learning curve has been independently releasing my new album last month. And while its music was written just before the stylistic changes I outlined here, the process itself is entirely relevant. Developing a strong tool-set in this area is as important as building the optimum listening and performance experience for my music. After all, our art is communication and the responsibility to do it well is our own.

Listen to Lachlan Skipworth orchestral work with shakuhachi and a choral work. 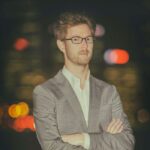 Hailed by The Australian as possessing a “rare gift as a melodist” and by Limelight as expressing “both exquisite delicacy and tremendous power”, Australian composer Lachlan Skipworth writes orchestral, chamber, vocal and experimental music. His vivid musical language is coloured by three years spent in Japan where his immersion in the study of the shakuhachi bamboo flute inevitably became a part of his muse. Winning the 2014 Paul Lowin Prize for orchestral composition established Skipworth’s reputation, and led to a string of major commissions and an appointment as composer-in-residence with the West Australian Symphony Orchestra.