INSIDE THE MUSICIAN. Emma Stephenson: Managing the Fear of the Magnifying Glass

I consider myself extremely fortunate to participate in an industry that allows me to embrace my bizarre constellation of musical tastes and artistic impulses. Like many people engaged in creative disciplines, I have spent a lot of time resenting the fact that deeply desiring to be ‘like *insert admired artist*’ does not always make that goal attainable. Each person is characterised by a unique combination of both aptitudes and ineptitudes, interests and disinterests, intuitive understandings and things that perplex us. I have found my practice as a musician to be a balancing act between self-improvement and self-acceptance. Practicing music is like having your skin checked by an attentive, magnifying glass-wielding doctor –  it amplifies all kinds of aspects of yourself – the good, the bad, the ugly, and parts you didn’t even know existed.

As a composer and performer, I am ultimately aiming for my audience to be glad that they engaged in the act of consuming my music. It sounds over simplistic but it took me a long time to realise that what I really wanted to do as an artist is offer some sort of transformative experience for people – be it an inspiration, an understanding, an insight, or an emotional connection of some kind.

Such are my grandiose thoughts on what it means to engage in a creative act. At the time that such thoughts were occurring to me, my focus shifted from merely attempting to surmount obstacles for the sake of self-improvement, to thinking more holistically about how to be in the world, while building a life around making music.

For me, studying jazz piano has largely been about the intricacies of the craft itself, which is a never ending source of tantalising opportunities for improvement and an enterprise that I doubt I will ever feel that I am “done with”. In my mind, playing jazz well is incredibly difficult –  and I rarely come close. It demands the best of your attentional and cognitive abilities, your command of your instrument, and your knowledge and familiarity with the history of the music. At the same time you try to “find your voice”, “be individual”, “make a mark”. I aspire to be a great jazz pianist because it demands so much of me to chip away at such a difficult task. To me, the craft appears so deep that I will never get to the bottom of it – and that is perfect because it gives me something to do – forever!

The time I spent learning to embody rhythmic patterns with Simon Barker during my final year as an undergraduate jazz student, was an essential key to unlocking my ability to express myself. The idea of groove as something that is in your body, a dance that you coordinate physically, not intellectually, was an insight that spawned many peripheral interests for me. One of those interests is the topic that I am investigating as a PhD student. I am thinking about ergonomic movement as a way to generate improvisatory language. I will take advantage of my freedom to write this piece in a non-academic style, and try to capture my ideas in a more general sense. I believe that music is likely to sound better when it ‘feels good’ to play, and that an improvisatory language that is comfortable and ideal for the player’s own body at their instrument, is likely to be one that allows for deep and satisfying self-expression. At the same time that I was doing rhythm work with Simon, I was also discovering and practicing yoga, which further intensified my fascination with the idea of getting ‘out of my head’ and ‘into my body’. A musician’s knowledge is only useful if it is embodied, that is, a form of knowledge that cannot merely exist in mental representations, symbols and language, but a memory of movement and tactile sensation.

Recently, the Taubman approach to piano technique has become the fabric through which I filter my pianistic options. My new teacher, John Bloomfield, is communicating invaluable insights to me about how to use every part of my body that participates in playing the piano – the fingers, hand, wrist, arm, torso – to work in synchronicity with each other. I confess that piano has rarely felt ‘easy-to-play’ to me, especially in performance contexts under pressure. My PhD topic was strategically selected due to the enormous personal investment I have in solving the problem of physical discomfort at my instrument – a process to which John, and his knowledge of the Taubman approach, is proving absolutely integral.

I am also enamored of the art of songwriting. I am deeply moved by artists such as Joni Mitchell, Bob Dylan, Leonard Cohen and Tom Waits. A large part of my performing life is spent singing and playing great famous songs to audiences in piano bars, and I truly love that style of music as much as the people who request the songs. Given my partiality to popular vocal music, I suppose that it is no surprise that I have always admired and been envious of great vocalists. As a kid I was songwriting and accompanying myself at the piano long before I developed an interest in jazz. I was classically trained as a pianist, but I was always attracted to other ways of making music. During my undergraduate degree in jazz performance I briefly abandoned my interest in songwriting and pursued the non-vocal, wordless form of expression available through the melodic, harmonic and rhythmic possibilities of being an improvising pianist.

Eventually I found ways to marry what I had learned in my jazz training with what I intuitively felt drawn to as a songwriter. In that union I found what I now think of as my niche, and the place from which I can best express myself. I generally feel that the ‘real me’, who exists in the ‘real world’ is inferior to the person that I try to give a voice to in my lyrics – it’s almost as if I am trying to channel the wisest parts of myself in my songs, which usually have a message that I am hoping to ingrain in my own mind as much as the audience’s.

Contrary to the instrumentalist stereotype, I have always found words as a form of self-expression particularly useful. Many musicians talk of being able to express themselves far better through music than through words. For some reason I feel I express myself best when I combine the two. I suppose that may be a natural result of my tendency to represent the world ‘in my head’, through verbal language – which I had to learn to balance with practices that help me to be more ‘in my body.’ I also was brought up listening to popular vocal music, mainly my dad and mum’s favorites – people like Elvis Costello, Crowded House, Joni Mitchell, Lowell George, the Beatles, The Eagles, and Rickie Lee Jones. I can’t help but feel a homely familiarity with that sort of music.

The formation of ‘Hieronymus Trio’, with Nick Henderson on bass and Oli Nelson on drums, was a pivotal moment for me.  We were very committed to investing time to practice as a unit, rather than as just as individuals, and determined to perform our own compositions as much as possible. For the first time, my friends and family who were ‘not really into jazz’ would come to my jazz gigs and feel that they could get into the music. This was the same time that I was starting to experiment with vocal compositions. Something about the human voice, and words as a form of expression, seem to give non-musicians a way into the music, even when it is rhythmically complex or harmonically dense. My first experience of having a great vocalist sing my songs was made possible by the Jann Rutherford Memorial Award for young women in the Australian jazz scene. In this project I wrote music for Hieronymus Trio and the acclaimed Australian vocalist Gian Slater, who brought my music to life in ways that thrilled and inspired me.

When I am not making or practicing music, I think a lot about the role of the artist in a 21st century Western Democracy. I am saddened by how difficult it is to monetise creative work, despite the potential of the internet to bring artists in contact with their most enthusiastic audiences. For most musicians, those people who would find enormous value in consuming their music are unlikely to ever discover it, despite them being theoretically reachable in seconds. My father (a programmer), and I are trying to develop a possible solution to this problem with our digital distribution service ‘EqURLity’ (at the time of writing, still in testing stage). I have also started a podcast called ‘Stuff You Can’t Say with Jazz Piano’, where I am interviewing other musicians, to try and take advantage of the audience-building opportunities available through broadcasting interesting conversations to the public. I care deeply about conducting meaningful exchanges with people, preferably through making music that provides some sort of transformative experience for them, or finding a transformative experience through something that they themselves have created. The idea of making music merely for myself just doesn’t sit right for me. I don’t like hearing comments from audience members like “I don’t know anything about jazz so I can’t say whether it was good or not”. I want to make music that produces reactions like “that moved me”, or “I was inspired”, or “what was that song about?”. I suppose that makes me a little idealistic, and dangerously invested in the opinions of people whose reactions I cannot control! Nevertheless I’m deeply motivated by that ideal, and grateful to have opportunities to continue pursuing it, such as those afforded by the 2017 Freedman Jazz Fellowship. 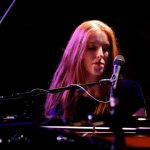 Emma Grace Stephenson is an Australian pianist, songwriter and PhD student, whose music combines rhythmic, harmonic, and improvisatory elements of modern jazz with folk and popular songwriting styles. Emma is the recipient of the 2017 Freedman Jazz Fellowship for Australian jazz musicians under the age of 36, and the 2016 recipient of the Jann Rutherford Memorial Award for young women in the Australian jazz scene. She has recorded her own music with Hieronymus Trio (Nick Henderson on bass and Oli Nelson on drums), on their debut self-titled album (2016) and on ‘Where the Rest of the World Begins’ (54 Records 2017, recorded at ABC studios).