What keeps me making music every day? Without excessive navel-gazing, it’s a question I ask myself often. I am a composer, run an opera company and perform other esoteric activities awkwardly clumped together as part of the remit of a ‘classical’ musician.

With my company, Sydney Chamber Opera, the reasons seem clear enough. There is no one else producing the repertoire we do – certainly not in Sydney, and nowhere with the same aesthetic preferences. When Louis Garrick and I founded this company, it was with an insane zeal that could only have come from us being freshly out of university and thinking we could attempt anything. Through some judicious choices and good fortune, the company survives today as a stable entity known for making precisely the kind of art we want. Is this an extreme form of decadence and narcissism? Founding a company and receiving public money to serve a personal aesthetic whim? It’s a tough question, but I can only hope that those who experience our work find it exciting, challenging and beautiful in the way I do. We are resident at a performance venue that’s perfect for our needs (Carriageworks) and can work with the kind of artists who crave the challenge of realising opera’s amazing, tortured history through the second half of the twentieth century right up until today. Uniting some of the most extraordinary music of our time with the best theatre makers around is the goal, and I hope we come near it more often than not.

As I write, we are rehearsing one of our oldest ever operas- Britten’s The Rape of Lucretia-  in a revelatory staging by our long-time collaborator Kip Williams which deeply interrogates every problematic aspect of gender politics and religion within this fascinating relic from the 1940s.

Premiering new operas has given lots of meaning to our existence; producing one world premiere a year might seem scant, but by any operatic standards it is a meaningful contribution. To have nurtured into being a work as profound as Elliott Gyger’s Fly Away Peter gives me lasting joy as I remember the inexorable process of untangling this great, original vision that unfolded on the stage in 2015.

What do I enjoy about rehearsing something like this? The relationships with other artists one builds working on such pieces are unlike anything else. I only find conducting interesting or satisfying if it feels like I’m unearthing some buried treasure or bringing something seemingly impossible to fruition. To use my skills to patiently chip away at a complex but artistically worthwhile score in order to present it with lucidity is extremely satisfying. Why? Because to get it over the line, I must work so closely and intensely with the performers it almost feels like we collectively compose the piece on the spot during performance: an exhilarating feeling.

My favourite example of such an experience is the six months I worked on Pascal Dusapin’s masterpiece (a word I usually avoid, but nothing else will do!) O Mensch! This is a formidable song cycle of Winterreise proportions that Dusapin always envisaged would be a stage work. It is an infinitely detailed series of settings of Nietzsche’s poetry ranging across his whole life, simultaneously building a portrait of the great poet and creating a new, fully formed stage character. Just a solo baritone and piano traverse their entire range of sound capabilities to meet its musical and emotional demands. In short, here was an Everest that could fit in your pocket.

When I decided we would produce it, I could think of no two people with whom I would rather share this journey than the gifted singing actor Mitchell Riley and the director Sarah Giles, whose penetrating vision had previously illuminated an inordinately complex double bill for us of George Benjamin and György Kurtág. I had conducted and played piano with Mitch on many occasions, and we just knew we could achieve the level of musical and intellectual coordination required by Dusapin. The months preparing the music and the weeks of staging were a complete joy, which for me epitomised why I love making music. The uncovering of endless detail which forces the brain down more and more paths it never would have thought possible produces its own kind of euphoria. The ability to focus on a single, ephemeral sound and derive a world of meaning that can speak to an audience is something so unique that I can’t not do it, day in, day out. Every note, phrase and song in this piece is so laden with information yet so open to interpretation that shaping it into a coherent whole must be done with a microsurgeon’s precision.

Gradually, text turned into sound, birthing stage action which in turn generated a stunning lighting installation by Katie Sfetkidis to bring the whole work together. Observing Dusapin rehearsing his own music and also having composition lessons with him gave me an excellent insight into his style and priorities, and the finished Sydney Chamber Opera staging of O Mensch! is one of my personal favourites of all the performances in which I’ve been privileged to take part.

When it comes to composition, I relish the opposite ends of the spectrum: complete isolation for long periods ending in frenetic preparation with the performers for a premiere. I am a habitual cutter; most of what I write ends up as scrap paper. Every time I touch a composition I am inspired by the lessons set down for our time by the music and teachings of György Kurtág. Partaking of his music’s extreme economy and perfection of expression induces a real sense of shame in me and forces me to question every shred of aural information I am setting down, testing it against the perception of the expressive truth I am attempting- probably fruitlessly- to convey. I am happiest when I can view a compositional subject from a multitude of shards, strung together with some kind of arcane logic to create a shadowy, three-dimensional form almost, but not-quite perceivable.

It was an enormous shock to the system for me to revisit and conduct my own opera Notes from Underground last year, after I felt I had come so far compositionally since its composition and original production six years prior. The opera is constructed out of large ‘received’ forms like sonatas, variations, chaconnes and the like and it seemed almost impossible to revisit and revise it. How crude it all seemed, how thinly-stretched the content and means of utterance! However, months of patient renovation aerated the form and expression to my satisfaction and it now stands as a weird hybrid in my mind and music between the time when I wholeheartedly accepted the idea of filling old bottles with new wine and now, when I wrestle to place even two notes in a row that gives me satisfaction.

The thought of creating another unbroken span of ninety minutes is terrifying and I have no idea if I can ever do it again. It’s the same as with Sydney Chamber Opera- if I had the knowledge I do now, who knows if we would ever have attempted to start something so risky, so young. But I’d like to think that’s the one thing I can pass on to any artists who for some reason might want my advice: please test your own knowledge and abilities against the world before you’re struck dumb with terror at the rejection we all face to differing degrees. I know too many artists who just grew a hard shell rather than risking something; insulated from criticism yet probably stifling their deepest artistic desires. I despair at the parochial anti-intellectualism and fear of expression I see all around us in every sphere of life. Please let’s try and keep art our one refuge for risk, for meaningful criticism and for endless complexity of expression. 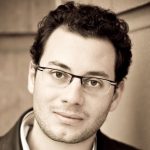 Jack Symonds is a composer, conductor and pianist, and Artistic Director of Sydney Chamber Opera. He has conducted the Australian premieres of major stage works by Dusapin, Kurtág, Benjamin, Romitelli, Kancheli and Britten and world premieres of operas by Gyger, Smetanin and Finsterer. His music has been played by the Australian Chamber Orchestra, JACK Quartet, Composers Ensemble, Australia Piano Quartet, Streeton Trio, Timo-Veikko Valve among others, and he has written three stage works for Sydney Chamber Opera, including Notes from Underground. He studied composition at the Royal College of Music, London under Kenneth Hesketh, and gained the university medal from the Sydney Conservatorium.