INSIDE THE MUSICIAN. Belinda Webster: Why I Do What I Do

I think I might have an issue with remembering. Not because I forget things, which I do. But because I worry that we humans forget. We see a never-ending cycle of things being done which repeat old mistakes. Our sense of history is not perfect, or ideal, or encouraged. If we taught our students a lot about history, a lot about morals and a lot about critical thinking methods, we could probably start to avoid repeating our mistakes. If we know our history we know where we’ve been, how we’ve dealt with it and how to go forward.

Culture is such an important part of our history. It is arguably the only aspect of ourselves that survives into the future. Our music, our words, our marks on paper, our shaping of materials, including architecture, are what will remain in 500 years. If it is in a form that can remain. I often wonder about the Voyager 1 spacecraft heading off into the universe with a disc of humanity’s music aboard. Will this be the only thing that remains of our culture once our solar system has been sucked into a black hole?

Before that dire and inevitable event, what is known about Australian music is something to which I will have contributed a small part. Oddly, I am intensely aware of archivism. In the 35 or more years in which I’ve been involved in making recordings, this has always been at the back of my mind. When Tall Poppies started in 1991 there was a whole generation of musicians and composers whose work was not being recorded for posterity. I thought there was a need for this. So did a few other people, as it happened. I was always an audience member who got excited about hearing a new work. I get similar thrills from seeing a new painting, reading a new book, enjoying a new building. Odd, I know, and I do spend quite a bit of time worrying that this sense of excitement is not something I share with all that many others. Most people regard cultural events as something to relax into, to enjoy but to not be challenged.

So the opportunity to make an aural record of an era in music is a pretty appealing one to someone with my penchant for saving, preserving, exhibiting. And yes, I was aware of this when I began. Half an eye was always on “posterity”. It sure wasn’t on the money, as there is none to be made. Just as well, I hear you say. Very sensible. There were probably other ways I could have achieved my goals, but having been seduced by the wonder of recording, why should I look further? Money has never interested me as an end in itself. And I have always felt that the relationships between humans would become much more interesting if money was taken out of the equation. OK, I digress into unsafe territory.

In the meantime, I was aware that there was a whole generation of incredible Australian musicians whose work was going to go down the historical plughole.  Their work as soloists and as chamber musicians was going to be lost. There were no Australian record companies with this issue in mind. I do acknowledge that ABC Classics was a fledgling label at the time and have done some marvellous things, and Move Records had a similar motive but largely restricted to Melbourne. That I was able to start Tall Poppies and continue it for over 25 years has been due to the generosity of many people – some who helped financially, some who wanted to play and be recorded, some who appreciated all this and bought the resulting recordings.

Having spent a lot of time recording concert performances all over Australia (nearly 20 years) I had time to consider history. I recorded concerts given by the Seymour Group and ended up with a really significant archive. Some wonderful works were only ever performed once. I recorded the Australia Ensemble for years and marvelled at the consistency in performance. Where were the recordings? How would these activities be viewed in hindsight, when all the players were retired?

Making recordings isn’t a guarantee of survival of any music. The results need to be preserved, saved, archived, accessed. We have no medium that is “eternal”. Everything eventually crumbles into dust. That spaceship becomes more interesting…. But in the meantime, a generation of Australian effort and creativity can be accessed. I’m not ever going to argue that what I have done is in any sense complete. It is a drop in the bucket. But a considered drop. Curatorship is a matter of making choices, based on perceived excellence and originality and interest. I have long lists of things I still want to do. There is room for another several outfits doing similar work – where are they? Who is doing it? Once I stop my work, who will carry it on? Talking about how things have changed and how things will change in the music business is probably the subject of another piece of writing, but consideration of these issues is crucial if one cares about history.

At the very least, I will depart this mortal coil knowing that some seriously amazing Australian musicians have a voice into the future. Such a thought is a huge thrill for me.

But an even bigger thrill came from a very recent release. It features one of my favourite Australian musicians – jazz saxophonist extraordinaire Sandy Evans. This project arose out of an offer from a supporter to fund a recording project (how rare and wonderful is that?) and the music, all written by Sandy, was directly inspired by a series of photographs I’d taken about 20 years ago. It’s quite odd to feel the existence of only a couple of degrees of separation within one’s own life. Created as a series of instrumental duos, this recording gave Sandy an opportunity to do some intimate work with some of the musicians with whom she has worked over the decades. They are Steve Elphick, Alon Ilsar, Satsuki Odamura, Adrian Sherriff and Bobby Singh, So it fulfilled a very handy archival gap, and the end results are quite spectacular. 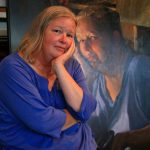 Belinda Webster OAM is the founder of Tall Poppies Records which has issued almost 250 CDs in its twenty-six year history. She functions as recording producer and engineer, and designer. She lives in Kangaroo Valley in NSW, Australia, and has been Artistic Director of Arts in the Valley, the biennial arts festival, for the last 10 years. She has presented her photographs in nine exhibitions. She has also made several short art films.In 2012 she gave a course called “How to be a Music Producer” as part of the Music & Technology course at the School of Music at the Australian National University.