INSIDE THE MUSICIAN. Martin Wesley-Smith: The Motor Club

Music has been a passion of mine since way back. I conducted my infant school’s percussion band. I learnt piano and cello. I sang in school concerts as a boy soprano. As a teenager I learnt classical guitar. I played banjo in a Dixieland jazz band and electric guitar in a dance/pop band. Later on I played banjo in a symphony orchestra (Eisler, Weill) and synthesizer in another one (Stockhausen). I sang in choirs and vocal quartets. And I sang and played in, and wrote songs and arrangements for, a vocal and instrumental trio during the 60s folk boom. In other words, when I started getting serious about composition, I had had an eclectic musical background.

In 1964 or so, the trio scored a week-long gig at the Motor Club in Sydney’s George Street (“Sydney’s worst club”, we were told). Monday night went down like a lead balloon. Worse, in fact: I don’t think anyone sitting at the long tables cluttered with jugs of beer even noticed we were on. When we came off, we said to the MC “Bloody hell, that was terrible!” He replied “You done good, boys. If you thought it was bad tonight, you wait till Sunday!” We spent the next few days working on ways to keep the audience (mostly blokes) entertained: a few jokes, a couple of songs that were a bit blue, a pop song or two – that sort of thing. Sure enough, Sunday night was dire, but at least they noticed us. Some even clapped. Briefly.

Now “entertainment” is a dirty word in elevated art-music circles. In a keynote speech given by composer Kevin Volans last June (https://www.cmc.ie/features/if-you-need-audience-we-dont-need-you), he pointed out, approvingly, that composer Morton Feldman believed “that art was not to be confused with entertainment”: the audience is required “to make an effort, to collaborate, to listen with intent, with a desire to experience something new”. Yes, indeed – but what if the audience doesn’t want, or can’t be bothered, to collaborate with the composer and musicians?

Volans points out that concerts of music in the 60s and 70s by Boulez, Stockhausen, Xenakis, Ligeti etc, backed by massive state funding, generated large audiences, yet “none of these composers set out to wow the crowds in any way when they began work.” Perhaps they didn’t need to: audiences back then, post-war, flocked to anything that was fresh, new, anti-establishment. As did I: Stockhausen’s Kontakte and Berio’s Circles were the most exciting things I’d ever heard. But the music and the concerts apparently didn’t sustain those audiences over time – they weren’t sufficiently wowed, perhaps – and they floated away …

By “entertainment” I mean something that is captivating in some way, intriguing, compelling, something that holds one’s interest, and/or is enjoyable enough, to make one want more. It could be something cheap and easy, or something that digs deep into the psyche. Or it could be a mix of these extremes. My aim as a composer is to provide audiences with an entertaining – in this broad sense – experience, but I don’t set out to “wow the crowds”. I set out to wow me. Me the ideal listener. If my interest is piqued, if it’s the kind of thing that draws me in, then there’s at least a chance that it will be successful with others.

My occasional use of humour, of popular music idioms, and of other devices generally regarded as a no-no in “serious” circles, has seen me dismissed as a populist, not your average hard-core seeker of new worlds. I maintain, however, that something can be funny, say, yet still be deadly serious. It can be simultaneously beautiful and unutterably sad. Music might be in a particular idiom or it could move through different idioms. No rules except one: be true to myself and do the best I can to intrigue etc myself as an ideal listener.

I’m tired of music that is unremittingly ugly (ugly is fine, but leaven it occasionally with something light, or funny), that is heroic, or portentous, or too earnest, or is consumed by its own importance. I look for music that eschews what’s currently fashionable, that explores original ideas with wit and humour. I listen to many kinds of music, finding more energy and invention in free-form improvisation, and in jazz, than I do in much so-called “serious” composition. I want music that has a vivid imagination that stimulates mine, music that connects – composer to performer, performer to audience, audience members to each other and back to the stage. Or composer to listener via headphones, say. Music that is meaningful in some way,that moves or excites me. Most of all I want music created with integrity, music that’s a true reflection of its composer and their relationship to their surroundings. That’s music I think I should try to create – but that “should” is the only one I accept. I’ve been told that I should compose in this or that idiom, that I should not base pieces on backwards and upside-down nursery rhymes, that I should sound more like Boulez, say. When I was a student I was told I had to choose between Webern and the banjo. Phooey! I will do what I want to do and will wear the consequences.

At the Motor Club we worked hard to get the drinkers’ attention, succeeded to a degree, then sang Pete Seeger’s powerful anti-war song Where Have All the Flowers Gone? (this was the 60s, and many in the room, including me, were conscripts). In clawing something back from the wreckage of the Monday night, we established a connection with the audience that meant that our gig wasn’t a complete waste of time. A few of my compositions have enjoyed some success with audiences, giving me a modicum of satisfaction as I stroll through the Motor Club of life.

YOUR COMMENTS are invited. They may be published unless you request that they remain confidential. Send them to loudmouth@musictrust.com.au 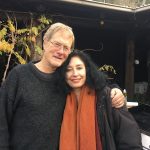 Martin Wesley-Smith taught composition at the Sydney Conservatorium of Music from 1974 to 2000. Since then he has lived in Kangaroo Valley, New South Wales. His output, ranging from children’s songs to multimedia pieces, covers two main themes: the life, work and ideas of Lewis Carroll (e.g. Boojum!), and the plight of the people of East Timor (e.g. Welcome to the Hotel Turismo). His twin brother, Peter Wesley-Smith, writes most of his lyrics and libretti; their 70th birthday, in 2015, was celebrated with concerts in Canberra, Kangaroo Valley and Sydney.