Apart from that ever elusive synergy of words and music in perfect song form the only music that truly interests me these days emanates from a collision of improbable forces. Ravi Shankar meets Yehudi Menuhin or George Harrison. Ry Cooder meets V M Bhatt or The Buena Vista Social Club. Paul Simon meets Ladysmith Black Mambazo or Urubamba. Phillip Glass meets just about every musician he’s come across. It must be the traveller and adventurer in me that draws me to these explorations in music. And maybe the fact that I grew up in the 50’s and 60’s in two very different cultures from a musical point of view. Downstairs was Jewish, Hungarian (classical music and opera) while upstairs was dinky di Aussie (jazz, Frank Sinatra, the Andrews sisters and Cole Porter).

Of course this is not just exemplified in individual musicians or groups from different cultures finding common ground and playing or recording together. There are times when massive historical upheavals have resulted in music that could not have happened under any other circumstances and which indelibly changed music forever. Slavery, for all its horrors resulted in the pentatonic minor of West Africa crashing headlong into the exclusively major chords of Christian evangelists. Two cultures, two musical traditions, two scales that collided in dislocation and violence and resulted, musically speaking, in what I see as the most significant change since the tempered scale and the development of harmony…… the blues and then jazz, rock, pop, rap, hip-hop and every other sub-genre of rock that can be named or imagined. Try to imagine the musical world without the impact of that colossal fault line in history. We’d still be playing polkas and minor chords might still be banned by the pope. Another fabulous example is the emergence of flamenco when North African Muslim Moors conquered Christian Spain.

This of course is not new. The blues developed hundreds of years ago. The meeting of Europe and Islam in flamenco emerged hundreds of years before that. But there is no doubt that globalization, migration, the internet and the ever-shrinking world is resulting in these meetings or collisions of improbable forces happening with increasing frequency. The results are by no means always successful but the possibilities are endless and fascinating!

I was, as a teenager, enthralled with the musical journey that The Beatles took us on and am very sure that this too was the result of a meeting of improbable influences. Four rough young rockers from Liverpool as talented as they were would never have broken through the barriers of pop without the collaboration with their producer, also known as the fifth Beatle, George Martin who was a skilled classical composer with a substantial background in producing comedy records. Unusual chords, modulations, string and horn arrangements, time signature changes, vocal harmonies that diverged from basic thirds and fifths, orchestral instruments, sound effects and experimental recording techniques must all have been introduced by Martin and then taken further again by the young Beatles who like all of us were thrilled with the music palette being so comprehensively opened up.

I have no logical explanation for the powerful allure the sounds of Indian music had on me when at the age of thirteen I first heard those exotic instruments on a Beatles record. Suffice to say it was enough to lead me to India for two years in my twenties and return to Sydney with a huge south Indian classical string instrument with a large gourd and the carved head of a dragon called the veena. If that’s not improbable nothing is.

Then there’s the cross fertilization from different genres of music collaborating. There was a time when the terms jazz rock, folk blues, classical rock, country rock, folk country, celtic reggae, chamber jazz, chamber pop, electro pop, ska punk and even sufi rock seemed like strange hybrids. Now they and an almost limitless array of variations are taken as the normal creative process among composers and players around the world.

Thankfully we seem to have resolved or simply left behind the dilemmas over terms like ‘world music’ and ‘fusion’. Even the most sceptical among us appear to have accepted that ‘world music’ is as good a term as any for exciting collaborations across cultures while enjoying multicultural music which seems to be reserved for a more ‘pure’ form of folk music continuing to thrive in our multicultural societies. Controversies over issues of appropriation of folk or traditional music from developing countries being used by composers and musicians in the west seem to be rare these days while musicians from Africa, South America and Asia line up to reach a wider audience and collaborate with the classical, jazz, pop and rock musicians of the west.

Nowhere are these improbable forces meeting, colliding and fusing more than in Australia. How lucky was I that my parents, fleeing war torn Europe ended up in Sydney where in the context of the world-wide meeting of improbable forces I, a second generation Hungarian Jewish boy playing Mozart, Beethoven and Bartok would meet and eventually work with musicians from India, Africa, Kurdistan, South America, Japan and Australian Indigenous artists as well as composers, singers and instrumentalists from the jazz, rock, pop, classical, new music and so many other genres that are too numerous to list. I wish I could name them all but that list in itself would take up my entire essay. Improbable and joyous forces indeed!

To this day, while having been to countless wonderful concerts I still quote Bob Marley and The Wailers live in Sydney in 1980 and Nusrat Fateh Ali Khan at midnight in the Adelaide Botanical Gardens at the second Womad as two of my most thrilling and transcendent musical experiences. I can imagine them playing together. 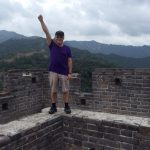